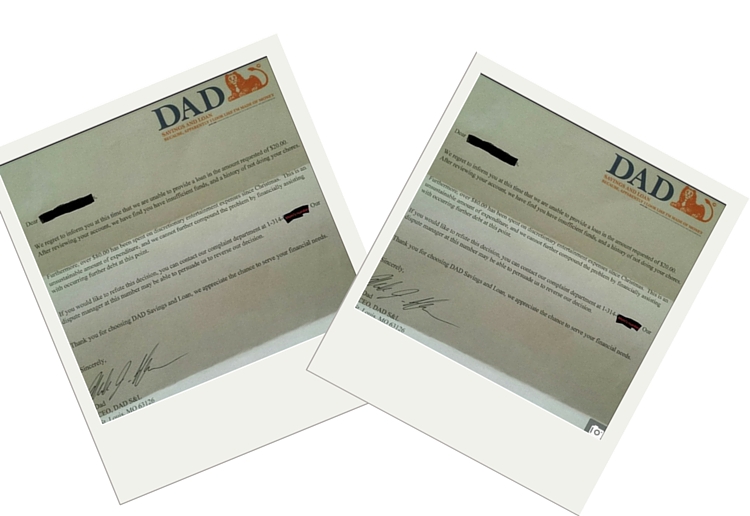 A young son who asked his Dad for extra pocket money, has had his request rejected with an official letter from the bank of ‘Dad’.

Uploading an image of the letter to Imgur, user Sonan303 shared the letter with the caption:

‘Our six-year-old asked Dad for an advance on his allowance for a toy. This is the response he got.’

The post has now been viewed over three million times world-wide.  It seems to have resonated with other parents, with one viewer pledging to use the tactic with their own children when they are older.

The ‘official letter’ includes a letterhead inspired by the ING bank logo with a lion and the bank name changed to ‘DAD’.  The hilarious slogan for the bank reads, ‘Savings and loan: Because apparently I look like I’m made of money’.

The letter reads, ‘We regret to inform you at this time that we are unable to provide a loan in the amount requested of $20.00. After reviewing your account, we find you have insufficient funds, and a history of not doing your chores.’

Further details given in the letter included,

“over $80.00 has been spent on discretionary entertainment expenses since Christmas”.

‘This is an unsustainable amount of expenditure, and we cannot further compound the problem by financially assisting with incurring further debt at this point.’

The letter does include an appeal process for the decision made for the child in question: ‘If you would like to refute this decision, you can contact our complaint department at [Mom’s number]. Our dispute manager at this number may be able to persuade us to reverse our decision.’

Users on the Imgur site went into meltdown over the cleverness of the letter.  Responses included:

‘As a father of a two-year-old, I am saving this for later,’ while LookHereSon posted ‘You made this? This is mine now.’

We wait to hear if an appeal was lodged with Mum about this decision.