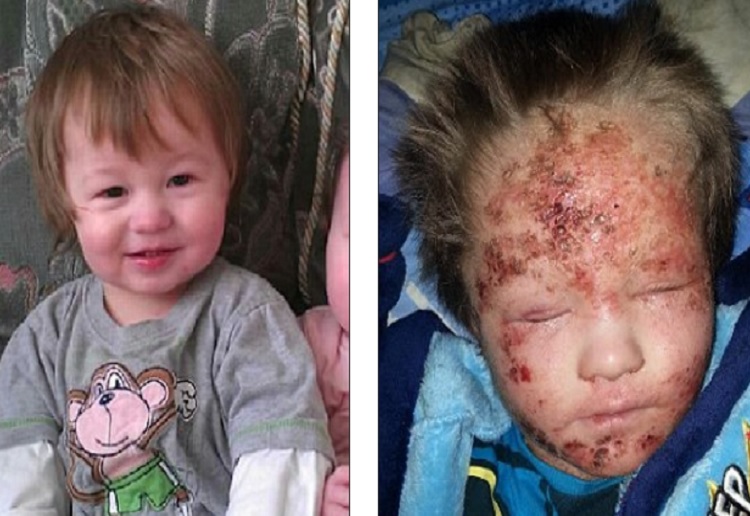 Father says his five-year-old son became addicted to the steroids in cream used to treat his eczema.

Charlie Maddy, now five, used to scream in pain at night – and at one point had to be sedated in hospital as he tried to pull off his own skin.

His father, Douglas, became distrustful of medics after they’d prescribed 10 different steroid creams that he ignored their advice and took his son off all the treatments, reports Daily Mail.

Through his own research he discovered that his son had red skin syndrome, a condition where the body becomes addicted to steroids in topical creams, causing more extreme symptoms when treatment is reduced or withdrawn.

‘Our little boy went through months of agony thanks to these steroid creams,’ Douglas says.

Douglas said: ‘It was so heartbreaking to watch Charlie like this.

‘I spent most of my free time on internet, trying all the different advice: creams, diets, change all the soaps in the house.

‘We couldn’t understand how he was fine for a year and suddenly got so bad – and was worsening every day.’

By the end of 2014, Douglas had changed Charlie’s diet and all detergents in the house, and been to see a private allergist to try pinpoint his problems – but nothing worked.

Dermatologists had prescribed 10 different Corticosteroids in creams and ointments to put on the skin.

He came across Red Skin Syndrome – which pins the painful condition on an addiction to steroid cream.

Douglas said: ‘Charlie was itchy and red all over, and it was becoming apparent he looked like some of the victims of Red Skin Syndrome.

‘I considered the possibility that it could be the steroid therapy making him worse.’

Douglas showed his research to four different dermatologists – who refused to accept that was the cause of Charlie’s anguish.

Frustrated, the dad decided to take his son off the creams entirely – going ‘cold turkey’.

Douglas admits he felt cruel going against all the advice he had been given by multiple doctors and dermatologists – but was so desperate to try something different.

He said: ‘I felt terrible, because what if I was causing my child additional unnecessary suffering for something I’d read online?’

‘My partner put her trust in me, but I’ve been constantly doubting myself for several months.’

A month after taking him off all the creams, Charlie’s skin started to ooze, his skin got hot and started to burn and was even flaking away.

He said: ‘All the symptoms that people wrote about online had suddenly appeared.’

The family had a consultation with Dr Marvin Rapaport, a specialist who confirmed the diagnosis.

‘We were having to go back to hospital, each time doctors encouraged steroids.’

The disagreement got so fierce Douglas was investigated by the child safeguarding board twice – as medics had reported the family for their decision not to treat his skin condition with medicine.

In January 2016 Dr Rapaport gave Charlie a healthcare plan, and sent it to dermatologists who finally agreed with his suggestions.

Charlie is now slowly starting to get better, and his sore itchy skin is finally recovering.

Douglas said: ‘It’s such a relief to know that after all those months of our little boy being in agony, he is on the mend.

‘We want people to know that children can get addicted to these eczema creams, and they sometimes are the cause of a worsening condition.’

That poor little boy!  So glad his dad fought for him and he is recovering slowly.