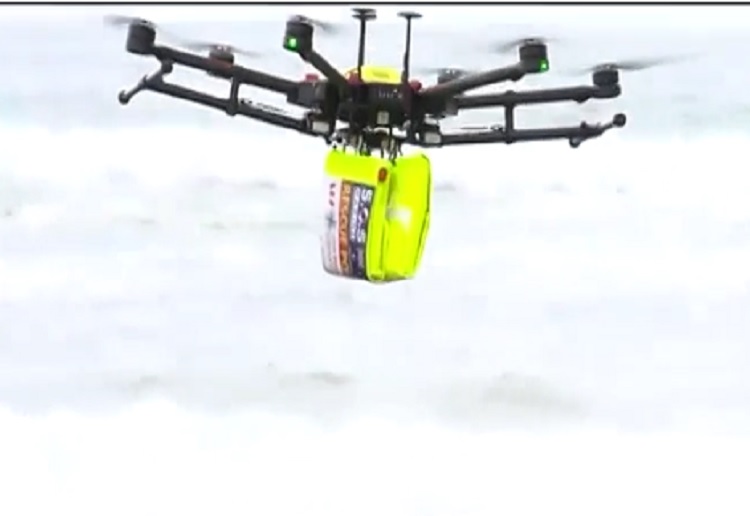 In a world first, two teenagers have been rescued from wild surf on the NSW far north coast by a drone.

The boys were trapped by powerful waves and a rip at Lennox Head when a drone came to their rescue.

As soon as the call for help came in, lifeguards managed to get the ground-breaking drone in the air within a minute. They used a remote controller to fly it to where the boys were, where they then dropped a life-saving flotation device.

Footage shows the remote controlled aircraft fly above the teenagers before dropping an inflatable device which landed almost within arm’s reach.

Within 35 seconds of take-off the float had been dropped down to the boys, who hung on as waves pushed them back to shore where lifeguards took over.

The pair were completely unharmed during their ordeal, apart from fatigue.

‘A flotation device was dropped and it inflated within a few seconds, they grabbed it and the waves pushed them in on it.’

He said: ‘The Westpac Little Ripper’s rescue of the two young swimmers today, in three metre dangerous swell, clearly illustrates the benefit of this cutting edge technology in such a time-critical emergency situation.

‘It works, and Australia is leading the world in this technology.’

So good to see them being used to help people!