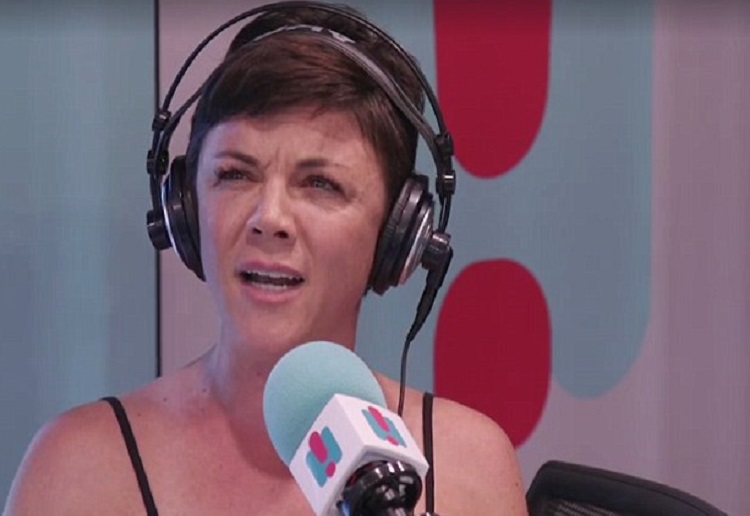 Comedian and Radio host Em Rusciano has lashed out at columnist Miranda Devine over her latest article targeting working mums.

The 37-year-old, who is a mother of two girls, was nearly driven to tears as she angrily disagreed with Miranda’s views on working mothers and motherhood, shares Daily Mail.

‘Miranda Divine has written a column… in which she basically said that women are defined by their family, women who care about careers are selfish,’ Em started her four-minute long speech, which she shared to Facebook.

‘She said that the pay gap isn’t real and that women prefer to selfishly work and then use IVF by choice.

‘It’s also like she thinks the mothers of the past were better and less self-obsessed than the working mothers of today.

‘But as a working mother of today that is complete b******t, we literally do everything.’

In her column Miranda expressed her views on working mothers, saying it is not a career that defines a woman, but her family.

‘This is an insight worth remembering as young women increasingly are coerced into prioritising careers and becoming feminist warriors against the so-called gender wage gap of the patriarchy, with state-subsidised childcare as the carrot,’ she wrote.

‘Most women are smart enough to understand that there are goals worthier than career status, even if they don’t always have the luxury of choice.’

She went on to say ‘motherhood is under threat’ and mummy blogs placed focus ‘on the mother at the expense of the child, teaching women that their worst failing is “putting everyone else first”.’
Em said the mothers of today worked to provide for their kids and because they appreciated having their own lives.

‘There is nothing wrong with mothers putting themselves first because that makes them better mothers,’ she said.
‘Miranda Divine I am not up at 4am to make a political point, I am doing it large in part because my kids need f****** iPads now at school.’

After expressing her feelings, Em was close to tears of rage as she spoke about her own situation as a working mother.

‘It just made me so cross, like teary cross, there are women working jobs not because we’re selfish but because we’ve got bills,’ she said.

‘I’ve had to live back at my parents as a single mother.

‘There is enough mother guilt going around, what we need to focus on is being good enough mothers, there’s no such thing as a good and bad mum, you just be good enough.’

Em is not the only person outraged

Brad Kearns from DadMum also had some harsh words for Miranda.

He shared on his Facebook page, “Hey Miranda Devine,

As a dad, I’ve never felt pressure to justify my career decisions to complete strangers.

Nobody has ever asked me how having children was going to impact my study or work. To be honest, I barely even entertained the thought that it could hold me back professionally.

Do you want to know why?

Because I’m a fu#$ing man and society just assumes it wouldn’t change anything.

My wife on the other hand has studied her a#@ off for her career, worked her a#@ off to be successful in it and stressed her a#@ off at the mere thought of returning to it after having both of our boys. She felt guilty as fuck on Monday as it was, but being the best mother today meant helping set up their tomorrow.

Who the hell are you to even insinuate that a woman who is career driven; has feminist motives and is only doing it to bridge a gender wage gap. What the f#@k kind of generalisation is that?

My wife is the strongest person I know and has more self worth than to return to work only to try proving herself in a field of men. She’s the best goddamn mother our boys could have ever asked for and she’s the best damn woman I could ever call mine.

Do you want to know what else she is? A major f@#king contributor to our community with the work she does. And she does it because she loves it. She does it because long after our boys grow up she will still have meaning in her own path.

It’s not selfish for women to return to work in any capacity… it’s just our turn as men to step the f@#k up and contribute more into our partnerships. I wouldn’t dare take her work away from her. So I’m not going to let you.

Your filthy column barely acknowledges the fact that the men of today are far more capable with our kids than the men of the past. Get off your corporate knees, walk into a daycare centre at 5pm and ask the women how f@#king easy their lives are.

I’m sure they would love to be home with their kids… do you want to know how I know that??? Because so would I.

I’m with Em on this one and so should every other parent blogger out there standing up for the people you just called out. Mums and dads alike; because not only are you calling women selfish, you’re calling men incapable. And none of us will cop it.

Call Marty McFly and get your ass back to where you belong… in the past.”

Illy – Alasdair David George Murray, a recording artist from Frankston in Melbourne, also had something to say in defense of his own mother.

He wrote on Facebook, “My mum has worked multiple jobs my whole life. Because she’s fantastic at helping others, but mainly, she worked herself to the bone to make sure her family was alright.

So when the vile, clickbaiting fool that is Miranda Devine writes an article “Don’t Let Your Career Make You A Bad Mother”, and calls women who focus on their careers “selfish”, I have to take a second to tell her to f#$k off.

Mum isn’t selfish, and definitely not a bad mother. She’s the epitome of selfless and hard working, and she is a f$#king SUPERHERO in my family’s eyes. And my family tree is FULL of women who are the same, and so are my friendship circles.

So, Miranda Devine, please do us all a favour and f$#k off. Come live in the real world before you comment on it, jackass.

Enjoy the extra clicks from this, its a small win I guess. But it’s been worth it to tell you how trash you are. I don’t get *triggered* easy, but talk shit on mum and it’s your ass! *exhales*”

He added in the comments, “Shout out to my old man as well. Mum didn’t do it alone. Which makes the jobs that single mothers that I know do even more incredible.”

Gotta love men sticking up for their wives and mum. Good on them both!

I think Miranda has some serious grovelling to do to get out of this one. Don’t you?