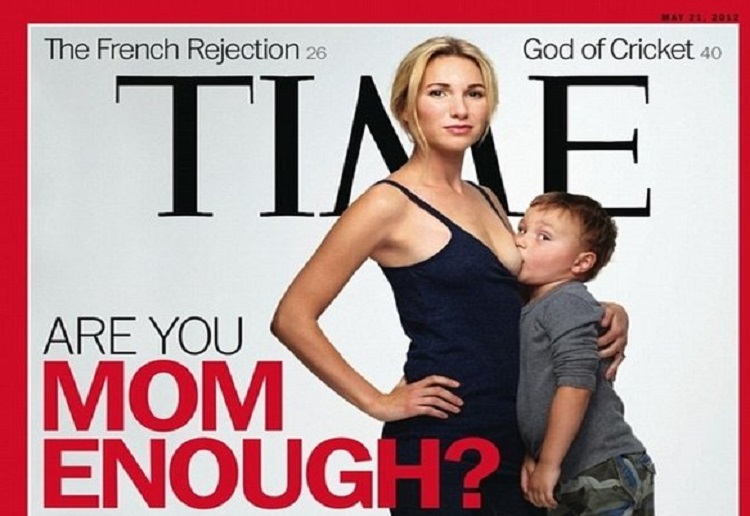 “They said breastfeeding on the cover of Time would ruin my son.” So did it? Mum shares the affect it had on her and her now eight year old son.

Jamie Grumet shares in a blog update on mom.me how their life has been affected since appearing on the, cover of Time magazine almost six years ago.

“I had been photographed for a story not about me, but about Dr. Sears and attachment parenting.

I was as surprised as anyone to see an image of me, standing there with my hand on my hip, my then 3-year-old son on a stool and nursing at my breast.

I was breastfeeding my son, Aram, who was 3 at the time. A media storm ensued, everything from laughter to outrage to strangely unfeminist takes on my appearance by a prominent feminist writer.

The common refrain went something like, “How could you set your child up for embarrassment like that?” and “That poor boy will be teased in school/in therapy when he grows up a serial killer/etc.”

People argued that, because of the power and permanence of the internet, Aram would never be able to escape that one moment’s bad decision.

Five years have passed, and my son’s enthusiasm for the cover hasn’t changed. He’ll tell kids on the playground about it sometimes (they always respond, “Cool.”)

Aram is completely proud of breastfeeding and that he appeared doing it on the cover of a magazine. He’s proud of me. He’s good.

So the kid on the cover is turning out just fine. Shockingly, he weaned (I know, I was really hoping we’d make it to college but, sadly, he was done at 4). The cover is a non-issue for him, but when he occasionally brings it up it’s positive.

No big scary bullies have come to verbally abuse him about having breastfed at 3. I imagine it’s going to be a pretty normal existence at this point, if he wants it to be.

All this to say, keep on trucking, Mamas. Parent the way you want. You and your children deserve so much more—space, peace, support, joy in what you are doing. No matter what other people think. Or whether it appears on the cover of a magazine.”

So there you go. No ill effects. He isn’t still on the boob in junior school. He is a very normal eight-year-old.