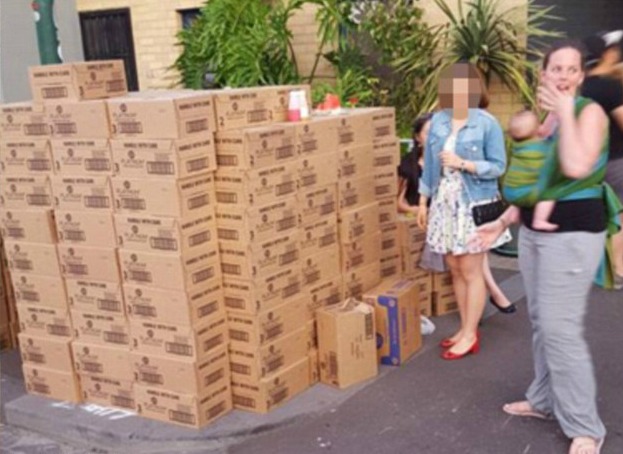 Pallet loads of baby formula is being guarded and secretly transported as parents around Australia desperately try to get formula for their babies.

According to The Daily Mail, new mum Kerry Frangos witnessed first hand the high level of secrecy and security surrounding the coveted products.  Returning from a shopping trip in West Melbourne, Kerry and her husband Paul, spotted large boxes stacked in a nearby back alley. Kerry told The Daily Mail that she was ‘shocked’ when she recognised there were allegedly ‘200 tins of A2 Platinum baby formula’ hidden inside the boxes.

“I saw a man who had a couple of boxes in his hands rushing away with them and when I looked into one of the open boxes I saw a silver tin with a blue lid,” said Kerry told the publication, “I was shocked…I was like ‘no, no way’ after a closer look I realised it was baby formula,” she continued.”I had my son there, so I didn’t want to get confrontational but I was shocked to see so much in one place,” she said.  Kerry went onto describe the guards that were posted in front of the formula pallets and how ‘strange’ it felt.

“I have friends who haven’t been able to breastfeed and they’ve told me that some places limit formula to one to two tins per person,” Kerry said, “I kept thinking how did they get, what looked like a supermarket load, delivered to them and how did they get a truck to deliver that much,” she continued.  “It’s bloody formula, I was really shocked, I didn’t really know what was going on, they were just guarding this formula” he continued.

Kerry and Paul took some photos which they posted to Facebook.  The woman guarding the stack of boxes can be seen in the photo.  Kerry asked her repeatedly how they go so much formula.  “When we went to take the picture she said “no, no, no pictures.”  Kerry said, “’They could be doing something legit, my question was just how did they get so much.”

According to The Daily Mail, the picture that Kerry and Paul shared on Facebook fueled discussion on limited supply of formula throughout Australia. One user said,

The picture of the incident spurred discussion of the limited supply of formula on Facebook and one user according to the publisher said: ‘We have mothers crying here in Geelong because they can’t find formula for their babies. This is disgusting.’

Another user, Christine Bruse said: ‘So wrong this should not be allowed…it’s sold on the black market for $AUD150 to $AUD200 back in China per tin.’

Have you or anyone you know been finding it hard to buy formula in Australia? Share your thoughts here.