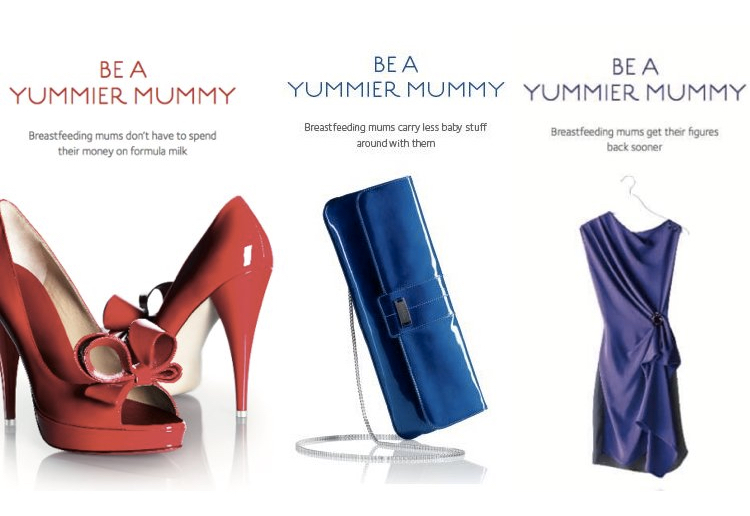 A hospital in the UK has caused quite the ruckus for a campaign trying to coerce new mums to breastfeed.

The campaign featured two pictures telling women they could be a “yummier mummy” if they chose to breastfeed over giving formula, as reported in The Sun.

Amanda Abbington, an actress from Netflix’s Safe, was shocked and revealed how disappointed she was with the Chelsea and Westminster Hospital posters.

She shared the two pictures to Twitter, with the caption: “Hey Chelsea and Westminster hospital. Sit down. Thanks.”

Hey Chelsea and Westminster hospital. Sit down. Thanks. pic.twitter.com/vuAXBm4LiU

The first photo featured a slinky purple dress, with the slogan: “Be a yummier mummy. Breastfeeding mums get their figures back sooner.”

While the second showed a pair of stylish red heels, with the caption: “Be a yummier mummy. Breastfeeding mums don’t have to spend their money on formula milk.”

There is also a third picture as part of the campaign, which displays a small blue clutch purse saying: “Breastfeeding mums carry less baby stuff around with them”.

The images were featured in the hospital’s newsletter saying:

“The Trust has also launched the Yummier Mummy publicity campaign to promote the benefits of breastfeeding for not only babies but also women in a fun, innovative way.

“Examples of the eye-catching posters used to promote the Yummier Mummy campaign are pictured.”

Women were outraged and were quick to react to Amanda’s tweet, with one person saying: “Adverts like this don’t help at all.”

Another commented: “Because cracked nipples, mastitis and chronic sleep deprivation makes you yearn for 5-inch heels and a mini dress? I mean…what?”

And one reader was disgusted: “Wow as if there isn’t enough stigma around not breastfeeding. Now a HOSPITAL is doing it? Gross.”

What do you think of this advertising campaign? Tell us in the comments below.