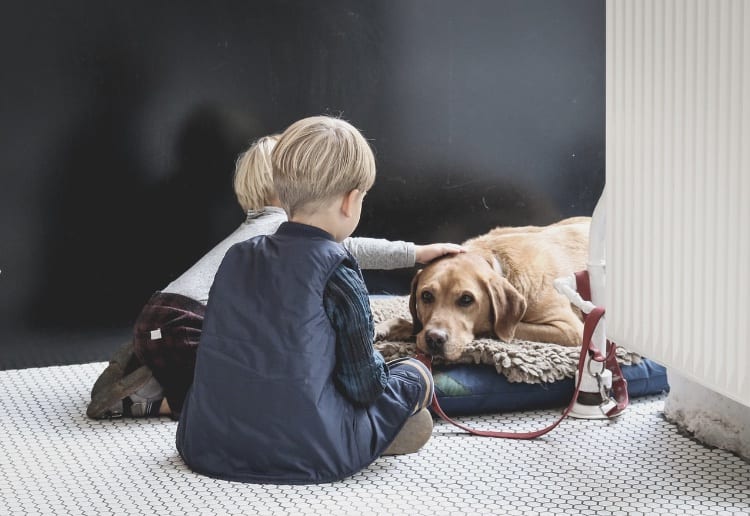 Pets are lots of fun and incredibly cuddly, so introducing a pet into the house brings plenty of joy to any family. But the advantages of having a pet as a child go far beyond that.

Growing up with our furry friends fills our childhood with great memories – how we were playing with them, feeding them, even shared our secrets with them. All these experiences turn into beautiful, long-lasting memories that are more than instrumental in helping us develop positive values in life.

Even children with disabilities or traumas, who had interactions with pets, have managed to develop better social skills where the standard methods failed. Being around animals, children will develop psychological benefits and traits which will help them in almost every aspect of their lives later on. Let’s take a closer look at the role of pets in this development process.

When it comes to an animal’s wellbeing, it should never be the sole responsibility of a child. However, while parents carry the ultimate responsibility, children can learn some good habits if they’re allowed and encouraged to participate in the care. Becoming aware that a living thing depends on them will teach them accountability and they’ll also develop a healthy conscience early on.

There are a lot of ways they can lend their tiny hand such as pouring food and water into the pet’s dish or taking them for a supervised walk. Remember, as a parent, it is your ultimate responsibility to take care of the family pet(s), but including your child in as much of this as possible will go a long way in developing the kind of bonds that will become unbreakable later on.

You can designate a certain area of your home for your pets and include your children in the project. Remove any potentially dangerous objects such as breakable items, loose wires and make sure that if you have any plants in and around the house, that they are the pet-friendly kind.

By participating in chores, children will realise that pets need shelter, food, exercise, and love, just like humans. It will be a valuable lesson about compassion and empathy, showing them the importance of being gentle and kind. Having an opportunity to become caregivers, they’ll be able to witness pets’ anxiety and fears in case of loud noises or unfamiliar places and learn to recognise and respond to their needs. Through this process, they’ll learn to feel others’ emotions, which is at the very core of empathy.

I’ll be There for You

Children can also learn about empathy the other way around. The loneliness of a neglected child will always be reduced by the emotional comfort of a pet. Pets can become a substitute for friends and family members, becoming someone who an upset child can confide in. They’re a non-judgemental source of affection and comfort, so children are more prepared to share their secrets with their four-legged friends rather than with people.

All this works towards developing self-esteem in the child. Animals don’t care if mistakes are made, so a child doesn’t have to worry about looking silly in front of them. The unconditional love of a pet provides support that is free from ego, envy, and jealousy. This is also helpful later on since it can boost the academic skills of a child – one study showed that reluctant readers can become self-confident ones by reading aloud to their pets.

Pet Me, Pet Me Not

Besides the fact that children will learn that another being needs to be treated with care, they’ll also learn it needs to be treated with respect. This is a trait that usually takes longer to develop since grownups are reluctant to show if something’s bothering them in the behavior of a child, or they have a hard time explaining it. But with pets, a child will feel if their behavior is inappropriate. Pets enjoy the interaction, but they also have limits that they don’t need to explain. While the body language of humans is controlled and often confusing, the simple body language of pets will make their boundaries more comprehensible to a child, learning them to respect the needs of others.

Pet ownership is also a great source of social support, especially in the case of less socially outgoing children. A child will approach another child more readily if it’s playing with an animal, so a pet can lead the way to a new playmate. Having a pet in childhood can be a significant factor in friendship formation and social interaction.

The same way pets can lead to more interaction with people, they can also lead to more interaction with nature. Both the child and the animal are explorers, so children will observe animal behavior and instincts outdoors with curiosity and interest. This will give them insight into wildlife, they’ll develop a sense of wonderment for nature, which will soon grow into an appreciation for all life on Earth.

Fear of the Unknown

Fear often stems from the things we don’t understand, the unknown. Animal behavior represents the aspect of the unknown, so growing up with the pet and becoming familiar with this behavior makes a child, less fearful of the unknown in general.

Having a pet also prepares a child for the greatest unknown: death. The decline of a pet’s health due to old age or illness will show a child that life is not infinite. At the same time, it will enable it to cope with that, showing it that shared memories and love are. The passing away of a bellowed pet will put a child through its first grieving process which will not only show it that life goes on, but also how precious it is.

Owning a pet is a huge commitment, but also an opportunity for your child to grow into a confident, responsible, and social adult. A pet will always lend an ear to listen, but it will also show your child that life doesn’t revolve around us. It will make it curious, appreciative, and respectful of all living things. To sum up, pets will provide your child with an invaluable experience in their formative years, which will inevitably positively influence their adolescence and adulthood.

Do you own pets? Have they had a positive influence on your life? Tell us in the comments below.