Article How These Special Dolls Taught My Kids About Diversity 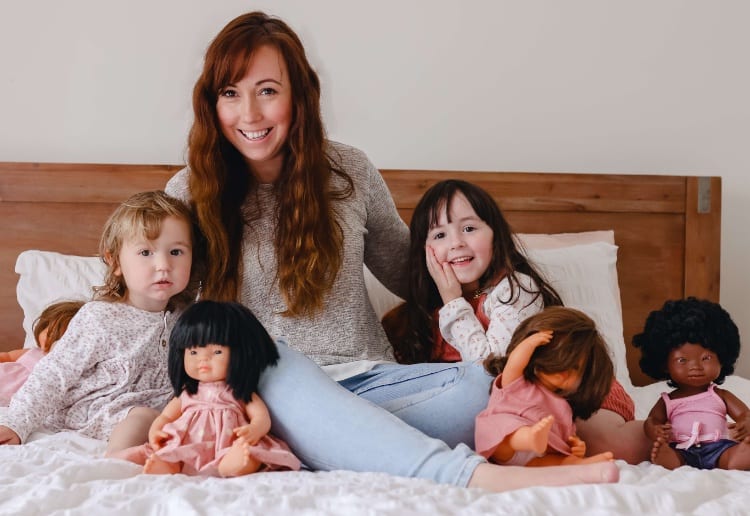 When people come to my home, they often make passing comments such as “oh your girls have quite the collection of dolls, or I’ve never seen a doll like that before.” Truth be told they do have quite a few dolls, however, this is by choice, not the random accumulation of unwanted gifts or impulse buys over the years.

Let me tell you why…

As a child, my favourite doll was a Caucasian female with blue eyes and blonde hair, and whilst I loved her dearly, being a brown-eyed brunette myself, I was never really able to identify with this doll or any of the other dolls we had in our home. I was not exposed to any diversity of race or condition as they were all Caucasian and they ALL had blonde hair – pretty common for an 80’s kid.

After reading about the importance of roleplay for emotional and social development, I started to research the ‘best’ dolls for children, as I wanted to gift my daughter Hazel her first doll for her upcoming second birthday and I wanted it to have dark hair like hers.

Like most online research, my first search returned an overwhelming number of offers from the usual mainstream brands, but it wasn’t until I dug a little deeper that I discovered a brand that was a cut above the rest; Miniland Dolls.

These Dolls Are Different

Miniland Dolls are a Spanish brand of dolls that feature African, Asian, Caucasian and South American dolls in different sizes. Their diversity allows many children to play with dolls that look like them, often for the first time. There are boy as well as girl dolls and they are all anatomically correct, meaning they have a defined gender with all the appropriate ‘parts’ which help children to understand differences in anatomy. The Caucasian range features redheads and brunettes, as well as blondes, so that was a huge bonus as far as I was concerned. I became an instant Miniland Dolls fan buying different dolls from each of their ranges.

When my girls play with their dolls, they instinctively nurture and care for them. By having a range of dolls that look both different and also similar to themselves, they are learning to care for others regardless of their appearance and by doing this they are building the foundation for inclusivity and empathy towards all people. This is an important early lesson and will shape how they will contribute to their communities later in life.

Dolls With Down syndrome

Recently Miniland announced the addition of four new Dolls with Down syndrome to their range, further strengthening their core values of diversity and inclusivity for all. Adding these dolls to our dolly family was a no brainer. I want to raise girls who are accepting of all people, regardless of race or condition. The addition of these Miniland Dolls with Down syndrome to our home adds another tool that helps me to educate my girls in a language they understand – PLAY! They are also quite beautiful too I might add.

This Sunday (21 March 2021)  is World Down syndrome Day, a global awareness day that has been officially observed by the United Nations since 2012 to celebrate the achievements of those with Down syndrome and raise awareness for the inclusion of all.

This week I have encouraged the girls to take their Miniland Dolls with Down syndrome to their kinder and day-care to help open dialogue in the classroom about helping others to feel a sense of belonging, regardless of our physical differences. They have been well received by the educators, and to quote my daughter (age 4). “On the outside, we can look different, but inside we are all the same.”

Win A New Miniland Doll With Down syndrome

Want to win a new Miniland Doll with Down syndrome? ENTER HERE!

How important do you think it is for dolls to reflect diversity? Tell us in the comments below.