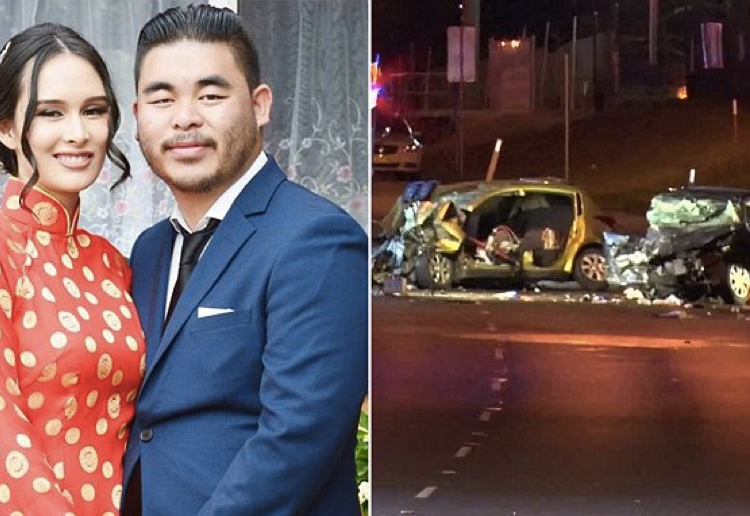 So tragic. The husband of Katherine Hoang, who together with her unborn twins were killed in the recent Orchard Hills crash, has reportedly screamed in agony and had to be sedated after a social worker told him that his wife and babies had been killed in the horror accident.

Mr Hoang had been in a coma in Westmead Hospital and when he finally became conscious he was told the devastating news that his wife and their two unborn children had died in the crash in Sydney’s west, involving a speeding driver.

“He screamed so loudly, ‘Why Katherine? Please not the babies’,” his aunt Pham Crawford told The Daily Telegraph.

“He can’t stop crying and feels guilty he’s the only one who survived.”

Ms Hoang was in the backseat of a Nissan Tiida driving on The Northern Road at Orchard Hills on 28 September when it collided with a Mazda 3 that was driving in the opposite direction.

She was killed alongside her 17-year-old sister-in-law who was receiving driving lessons from Mr Hoang.

Calls For Charges For The Deaths Of The Twins

The hospitalised Mazda 3 driver, 29, has been charged with 10 offences including two counts of manslaughter, aggravated dangerous driving and unlicensed.

He was allegedly driving at speeds of more than 100km/h – 45km over the speed limit.

The family of Katherine Hoang, who was reportedly due to give birth this week, have called for manslaughter charges to also be laid with respect to the unborn twins, saying “these babies were already part of the family”.

One of Ms Hoang’s friends from university said people were “devastated and paralysed” by her death.

“Katherine, who liked being called Kate, was a smart, brilliant, funny, kind, loving friend who never had a bad word to say about anyone,” Tom Cross told AAP.

“Hearing of her passing along with two unborn twins is a senseless loss beyond words.”

The family has postponed the funerals until Bronco is well enough to attend.

A GoFundMe page has been set up “to help them through this terrible time”. The page has raised over $46,000.