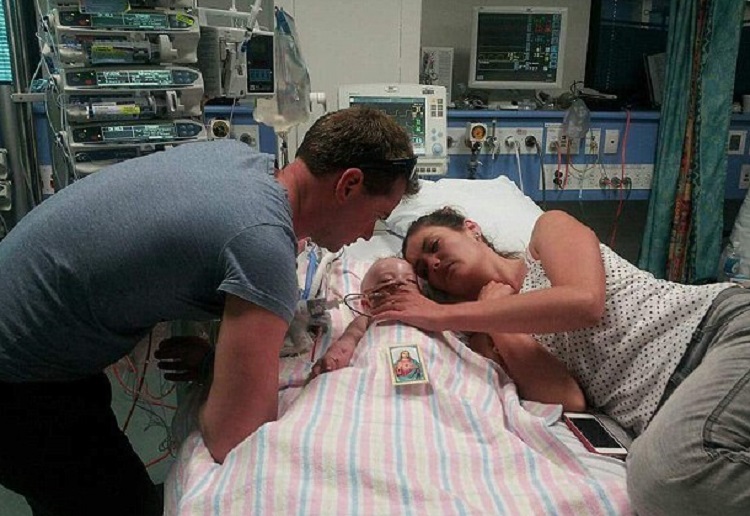 Kyran Day was only six months old when he was admitted to Shoalhaven Hospital on the south coast of NSW on the night of October 19, 2013 where he was allegedly misdiagnosed with gastroenteritis, The Daily Telegraph reported.

By the time doctor’s formally diagnosed him with a bowel obstruction and he was rushed to Sydney Children’s Hospital to undergo surgery, the toddler had suffered several cardiac arrests.

His parents Naomi and Grant Day have spoken of their devastation following the death of their son, saying they want justice.

‘This is our 3rd year now and it’s been hell but we will keep going until we have answers and justice for Kyran James day,’ Mrs Day wrote on Facebook.

Mr Day said: ‘We will fight and continue to fight for change and Kyran’s legacy for all the babies, children and parents without a voice.’

Daily Mail reports, The coronial inquest heard Dr Toby Greenacre refused to re-examine Kyran because he had ‘more urgent cases’ and two ambulances were delayed as emergency crews were on their lunch break.

After waiting four hours for an ambulance, the family were finally airlifted to Sydney but three days after he was first admitted, the young boy died from oxygen starvation.

The two-week inquest will examine Shoalhaven Hospital staff who were involved in the case, including a paediatrician, two nurses, Newborn Emergency Transport Service and NSW Ambulance.

It will investigate the communication between staff members, why a rescue helicopter was rejected, the handover from the hospital to paramedics and why a nurse did not direct an ambulance.

Dr Greenacre has told an inquest today he believed only a very small proportion of babies presenting with similar symptoms to Kyran, which included vomiting and dehydration, would have had something other than gastroenteritis.

9 news reports, he stated that the senior nurses who also treated Kyran had acted within the guidelines for treatment of his symptoms, but highlighted the busy nature of Shoalhaven Hospital’s children’s ward.

“I might say that if there had been no other patients in the hospital I would have spent the entire time caring for Kyran,” he told the inquest.

Dr Greenacre apologised to the parents Naomi and Grant Day, saying he was sorry they had to witness their child suffering in his final days.

“You are not alone in your grief,” Dr Greenacre said in a prepared statement.

“Kyran has been and will continue to be in my mind every day. I will never reconcile to his death.”

9 News reports, Dr Greenacre also expressed concern at delays to organise Kyran to be transferred to a Sydney hospital, but he admitted he could have been more proactive in ensuring an ambulance was organised as soon as possible.

We wish the family all the strength to get through this long process.