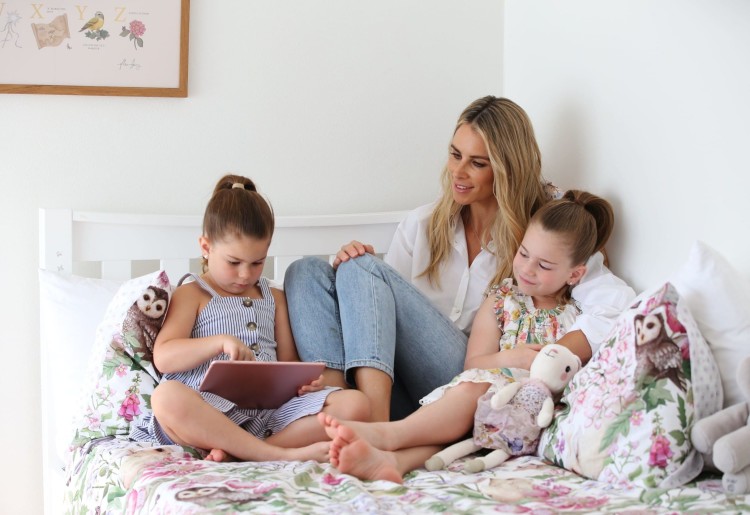 One of the biggest curveballs 2020 threw our way was the unchartered territory of home schooling kids whilst trying to work from home. Here former Ironwoman and mum of three Candice Warner tells Mouths of Mums how she coped during lockdown and also how she fared on the most gruelling TV reality show to ever hit our screens – SAS Australia.

As a family we actually had a lot of fun and spent some really quality time together as David wasn’t able to travel with cricket. We did a lot of learning and having fun like movie nights. We enjoyed days and nights that we don’t usually get to spend together. However, it was tiring at times. My oldest girls share a bedroom and there were times that they bickered.

It was challenging but I had to make it work. Particularly Ivy who’d started kindy and was learning to read and write – I tried to give her as much attention as I could. However, a few years ago she and Indi started doing an app called ABC Reading Eggs so that made my job as mum and make-shift teacher easier. It gave me peace of mind that she was doing something educational whilst having fun. So, as it teaches reading skills such as phonics through animated games and songs, they love it when they finish a game, and a character called Sam the Ant comes on. They’ll sing along with him and like the reward of extra games It gives them a sense of accomplishment and that’s exciting for them.

My girls have always had a keen interest in books. Either David or myself read a story to the girls every night and they take turns choosing the book. So, it’s always been really important to us as a family that we create good learning habits early on. I’m a big believer in the importance of developing reading skills from a young age but it still needs to be fun while they’re learning – kids still need to be kids! The app has been unreal for my girls.

A friend of mine told me about it a few years ago and it’s been a lifesaver ever since. As we travel a lot, I’ve always lugged a lot of books around. After a while, the girls got bored as they’d read everything. Once I discovered Reading Eggs, I didn’t have to travel with such a large heap of heavy books as the app has access to an online library as well.

Look, I definitely think kids spend too much time on screens in general, but devices are now a fact of life and here to stay. So, when my kids do an educational app it’s peace of mind knowing that they’re not just watching YouTube videos. When they’re learning to read, I don’t have a problem with them doing their devices, particularly if I have to get dinner ready, change a nappy or run a bath.

Just the toll on your body. It was brutal, even worse than it looked like on the show. There wasn’t much eating involved – thin porridge for breakfast, a scoop of soup for lunch and some lentils and chicken at night. I went from 60kg to 55kg in just 12 days.

Physically the hike in the snow where I had to pull a sled behind me that weighed as much as me was very tough. We’d shiver all day and that takes up a lot of energy. You could never switch off and relax burning so many calories. At night they’d turn the lights off at 10pm but often they’d have us up again to do something else. You never knew what was coming.

Mentally the hardest thing were the vehicle rides. It’d take an hour and a half to get to some locations. You’d be in the van shivering in wet clothes with all this time to think. I’d start missing my family and questioning what I was doing. I had to remind myself the reasons for being there. Just talking about this is starting to give me flashbacks! However ultimately it was awesome.

I formed a strong friendship with [comedian] Merrick Watts. He slept in the bed opposite me and we shared a drying rack. I sympathised with him as he was a bit older than most of the other contestants, so he’d get tired. I’d say I’ll look after drying your clothes, and he’d tend to the fire. I also got close to [rally driver] Molly Taylor. We’d often share a laugh over things, like the fact that normally I’d never strip off in front of people, but I just didn’t care as I just needed to get those wet clothes off me so fast!

I felt people did tend to gang up on [actor] Firass Dirani, but he did make a bit of a bed for himself. He tended to rub people up the wrong way, but I could see the good in him and admired that he was really strong and capable. For someone to be able to endure that much punishment and keep going was admirable. I don’t think any recruit could deal with it like he did and make it through.

Ahhh – I’m not sure about that! This year is actually going to be very challenging. It will involve a lot of time for myself and girls. It looks like David will be away on tour for a minimum of seven months from the end of February to September – maybe even November. Unless laws change, we won’t be able to visit him. I know it’s going to be important for me to find balance. I don’t want things to get tough and then take it out on the girls as that’s really unfair. I’ll be continuing to exercise and do some work whilst spending time with the girls. In wintertime it would also be nice to get away somewhere accessible which is nice and warm. We’ll see.

Visit ABC Reading Eggs to sign up for a free 30-day trial.