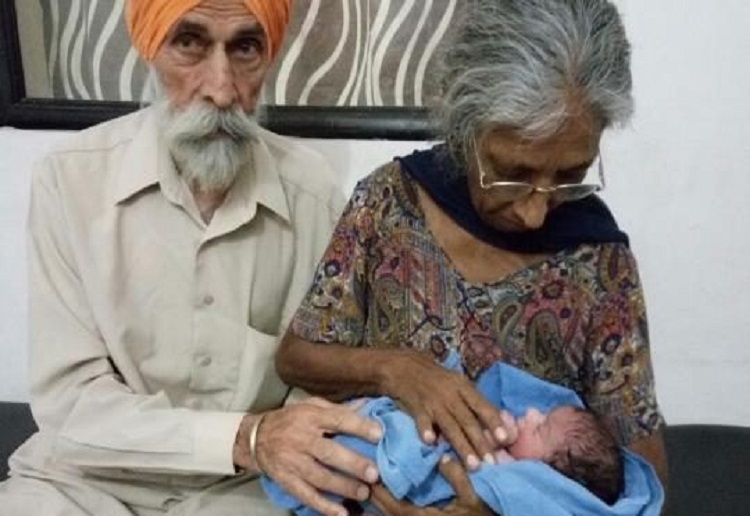 Daljinder Kaur, believed to be in her seventies, gave birth to a healthy boy last month.

The Telegraph reports, the National Fertility Centre in Haryana state, offers fertility treatment to women who are decades beyond their menopause.

Although her exact date of birth is unclear, Mrs Kaur told doctors she was a few years younger than her husband Mohinder Singh Gill, 79. If correct, that would make her the world’s oldest mother.

“Every one asked me to adopt a baby but I never wanted to. Now I have my own child,” said Mrs Kaur.

“We will raise him and give him a proper education. I had faith in Almighty that I will have my own baby, and Waheguru answered my prayers,” she told the Telegraph, using the Sikh term for God.

The couple have been married for 46 years, and decided to try IVF after seeing an advertisement for the clinic in neighbouring Haryana in a newspaper.

India’s medical council has lobbied for a bill banning fertility treatment for women aged 50 and above, citing health concerns for both mother and child.

Dr Hrishikesh Pai, head of India’s federation of 31,000 gynaecologists said “We condemn this totally. With science, you can make a 90-year-old person pregnant, what’s the big deal? The question is not about technicalities, it’s about ethics. Our responsibility to the patient. This man is an upstart, he doesn’t represent us.

He needs to be banned.” “Not a good idea. It’s cowboy medicine,” added Dr Aniruddha Malpani, who runs a Mumbai-based fertility clinic. “Doctors are just out to show how much they can push the envelope. This gives IVF doctors a bad name. People think we’re irresponsible, doing stupid stuff.”

The Daily Mail reports, Mr Gill, who is a farmer admitted that they turned to IVF to try and end a legal battle over his father’s inheritance worth (500,000 pound) over $980K au.

He said: ‘My father was trying to deprive me of a share in his property on the plea because I didn’t have a child.

‘We had been engaged in a tussle for more than four decades.’

Mr Gill’s father Uttam Singh, who passed away eight years ago, wanted the property to be split between his children.

However Mr Gill claims his four siblings refused to give him his share because he had no children of his own to take care of.

Mr Gill said: ‘When this fight started, I was in my 40s so my wife and I tried to have a baby but there was some medical complication.

‘We went to see many doctors but it was the 1970s and 80s, so medical facilities weren’t that great.

‘It was embarrassing to not be able to produce a child, no doubt, but we got caught with litigation.’

Image via The Telegraph