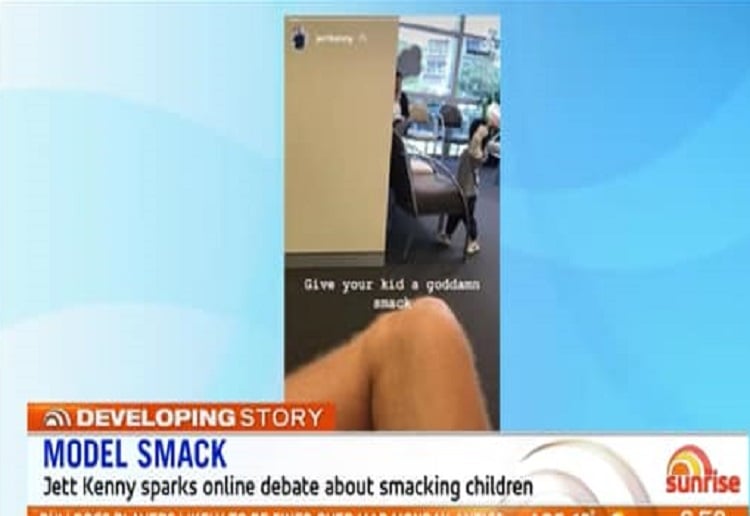 Jett shared the image on Instagram stories while waiting at the doctor’s with the caption ‘give your kid a goddamn smack’. 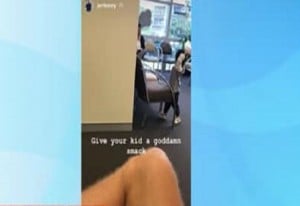 The discussion was then sparked on Sunrise Facebook page with many people saying good on Jett for speaking his mind.

However the sunrise hosts argued that parents have a tough enough time as it is without strangers giving them critical advice.

– I was at the doctors getting a referral for an MRI on my knee if anyone wanted to know the finer details of my life. Not at the airport.
– As I child if I did something naughty (yes I do know how to spell that difficult word, someone give me a sticker) I got a smack, which then associated punishment if I was naughty.
– “Nawty” was a way to lighten up the situation, if you say it like Herbert from family guy but without the creepiness behind it you’ll understand.
– I never said a word to the lady, but she did deal with the child as best as she could without smacking.
– my fear was with the pencils, we all know what happens to the lead when you drop a pencil. Those poor kids who have to try sharpen them afterwards.

He added, “Surely there are bigger things to focus on than a poor excuse for a “model”s instagram. But I hope everyone has a lovely day.”

“Good on Jett! We were smacked as kids and we grew up to be respectful and well adjusted adults. Didn’t do us any harm.”

“Good on you mate. Look at what’s happening kids aren’t being punished for their actions anymore. And you have kids hanging other kids (my heart goes out to that poor little girl ) and kids running around on the streets doing what they please. Bring it back. Regardless of what anyone says. It’s becoming a nightmare.”

” Everyone has an opinion in regards to smacking, some children need a tap when all else fails, THERE is a difference between a smack and a flogging Parents must have the common sense of which is best for there child.”

“If a child is taught right from wrong when they are small there would be no need to smack. My kids got a tap on the hand if they did wrong and told in a firm voice from a very young age so when they were older they knew the rules. A smack does not hurt a child if done correctly.”

“Yeah good on him for speaking his mind! Nothing wrong with a smack here or there.
That’s the problem these days no discipline creating a generation of kids that just run wild and don’t have respect morals or anything!”

“I agree discipline is needed. However as a parent with young kids it’s impossible these days due to social media and the PC people. Don’t discipline and you get funny looks and told off, give your kid a two on the hand because they ran away into a car park and you have people threatening to call the cops on you, it’s a no win situation.”

Model Jett Kenny has sparked online debate after posting a photo of a misbehaving child with the caption ‘give your child a smack’. pic.twitter.com/6YA2SzlT2B

Jett has since shared another post on Insta stories pointing out that he was waiting at the doctor’s not the airport and he didn’t actually say anything to the parent he was just observing the behaviour and concerned for the pencils. 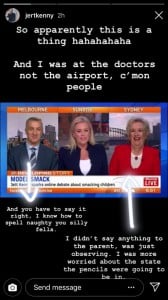 How would you feel if a stranger snapped a photo of your child and captioned it “give your child a smack”? 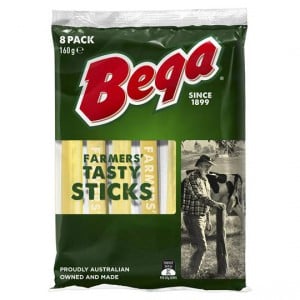 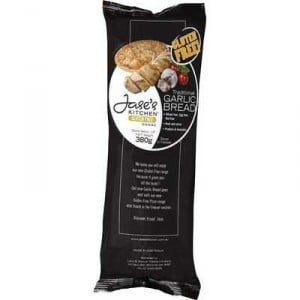 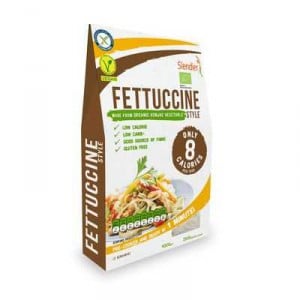