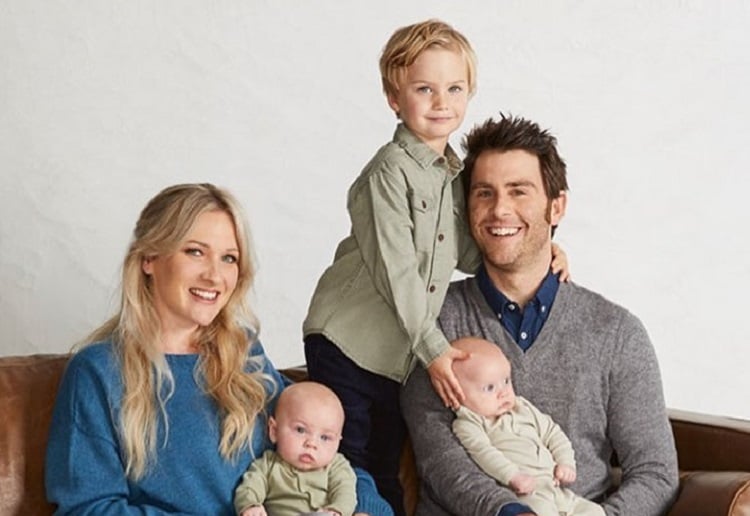 Jimmy Rees (aka Jimmy Giggle) and wife Tori have opened up about the moment they thought they were going to lose one of their twin sons after a simple day procedure.

Jimmy was starring on Dancing with the stars at the time when a phone call from Tori changed everything.

In an interview with Stellar magazine the parents of three share how Tori was at a clinic with Mack for a routine tongue-tie procedure when Jimmy got the life shattering call.

“I had three different professional opinions and they said his feeding will be so much better if we get it done, so we did it,” Tori tells Stellar.

“A tongue-tie procedure is meant to be no big deal whatsoever. It might bleed the tiniest bit, then you feed them and that’s really it. But in our case, it was just done wrong.”

Rees noticed he had several missed calls from Tori and when he called her back Mack’s condition had gone from mild to critical.

Mack was taken by ambulance to Gosford Hospital, where they were met by a team of more than 20 doctors and nurses who took the baby straight through to emergency theatre.

“This is something they rarely see — that age and that amount of blood loss,” says Rees. “His heart rate had dipped below a threshold so they actually started administering CPR to him. [The surgeon] got him in and managed to put the stitch in and stabilise him. [He] had to have a blood transfusion.”

The first response from the hospital staff was that Mack would need to be airlifted to Sydney Children’s Hospital in Randwick, but they quickly realised there wasn’t enough time.

“You know when you hear ‘We have to fly him to the Children’s Hospital because that’s where the best facilities are’ — you think ‘That’s not a good thing,’” says Rees through tears, the memory still fresh in his mind.

Our story about what happened to our beautiful 7 week old Mack. Parents, please tune in shortly on @studio10au. Hopeful to spread our story so things like this can be avoided. A very hard story to tell @jimmyrees_

“I was still at home. Tori was thinking the worst. When we debriefed weeks later, we both just burst into tears and said, ‘I thought he was gone.’”

“It was a surreal position to be in, just thinking he wasn’t going to come home.”

The couple understands mistakes can happen but says it was the delayed response from the medical professionals that led to Mack being in a life-threatening situation.

“There were some errors of judgement and that’s for [the NSW Health Care Complaints Commission] to figure out, and they are,” says Rees.

“These things happen but it was the reaction, the handling of it which wasn’t right. We know accidents happen, everyone’s human. It was unfortunate it was Mack. But the events that happened after were not right.”

The “Unnecessary Procedure” Labelled a Dangerous Fad by Doctor’s