Article KFC Is Testing Out A Chicken And Doughnuts Burger 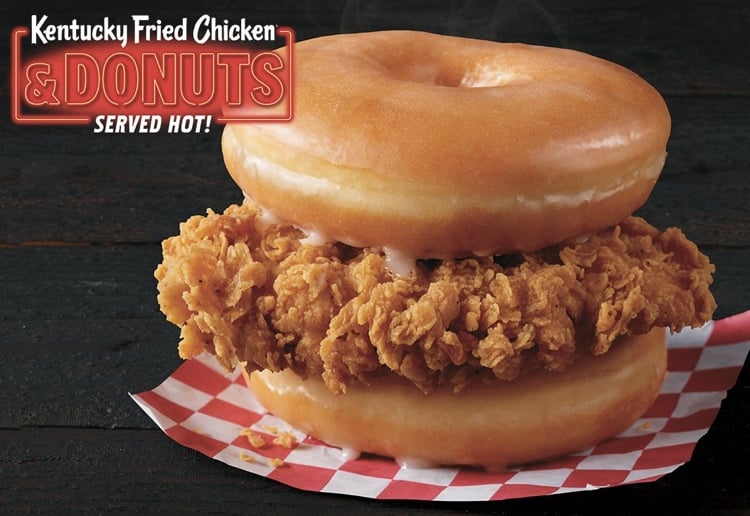 It’s a bit of a dubious flavour combination but KFC’s chicken and doughnut burger is causing quite a sensational stir amongst its fans.

There are two salty/sweet menu items to pick from:

KFC & Donuts Sandwich – which comes with a crumbed chicken filet (flavoured with the Colonel’s famous 11 herbs and spices, of course) sandwiched between two glazed doughnut buns.

Then there’s also a KFC chicken-and-doughnut meal, served with a glazed doughnut on the side, rather than the more conventional coleslaw or mashed potatoes.

The chicken-and-doughnut meal will cost $5.50 for one doughnut and $7.50 for two doughnuts. The sandwich is priced at $6, or as a combo meal for $8. KFC said customers can also add a doughnut – served hot – to any meal for $1. (all prices in US Dollars)

The internet has gone a bit dough-nutty in response to the new, rather odd offerings. Most are commenting about the dubious ‘health’ factor of the super sandwich.

KFC just created a fried chicken sandwich served between 2 glazed donuts. It’s recommended that you eat the sandwich only when you’re within 1 mile of an emergency room. https://t.co/D8UA5AFEBS

It is yet unknown what the nutritional value of the new sandwich is, but we can take a pretty informed guess, that it would be on the larger side of the scale.

Will It Come Here?

The experiment is currently being conducted Virginia and the Pittsburgh area in the US and if successful, KFC will then expand the cluck-tastic combo nationally and even internationally.

The doughnuts apparently arrive at stores already cooked, and when a customer puts in their order, the doughnuts will be dipped in the fryers and glazed with a vanilla icing to ensure they are hot and fresh.

Make Your Own Doughnut Chicken Burger

In the meantime, while we wait for this ‘delicious’ duo to hit our shores, simply grab two Krispy Kreme’s original glazed doughnuts and sandwich it together with a KFC chicken breast and you’ve got your very own Doughnut Chicken Burger.

Would you be keen to try out the new KFC chicken/doughnut burger? Tell us in the comments below.