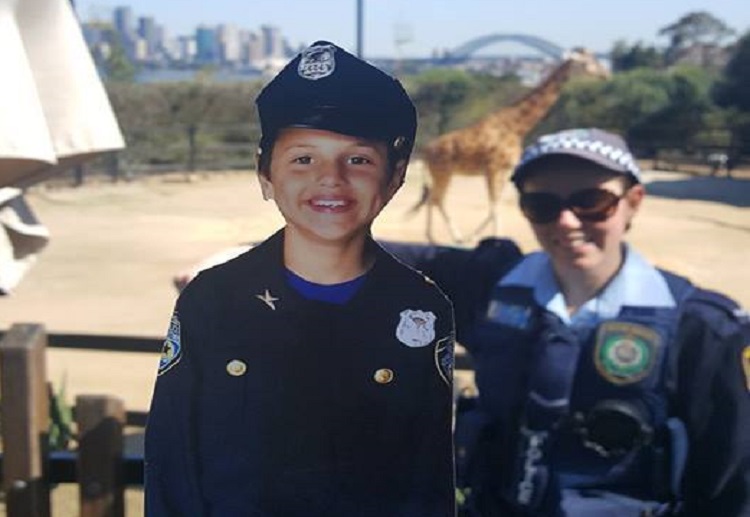 Meet “Flat Caleb” the little boy travelling the world one Police station at a time.

NSW Police have shared an awesome idea that one mum organised for her nine year old son who has autism.

“A few weeks ago Harbourside LAC – NSW Police Force received a phone call from the US from the mum of Caleb, a 9-year-old boy with autism whose birthday is coming up soon.

Caleb is a big fan of police and loves to visit as many stations as possible. Now obviously money is an issue so mum, thinking outside the box came up with the idea of Flat Caleb. He was sent to us in the mail with a request to send him out with local Police on a Police adventure. How could you resist that!? Flat Caleb was sworn into the NSW Police Force and let loose on the Harbourside Local Area Command.

Having served with distinction in the field, Flat Caleb has been successful in his recent transfer application and will be heading off to the Griffith LAC – NSW Police Force in central NSW for a taste of country Policing before deciding where he wants to head off to next, maybe PolAir – NSW Police Force Airwing or Marine Area Command – NSW Police Force?.

Thank you for your service Flat Caleb. Whilst not very talkative, you were truly an inspiration.”
#FlatCaleb

The post which was shared earlier today has already received over 1ooo reactions.

Flat Caleb has already spent some time with Police in the US. See pictures below.

Fantastic idea, mum! Well done to NSW Police for participating. We hope to see much more of Flat Caleb around Australia.