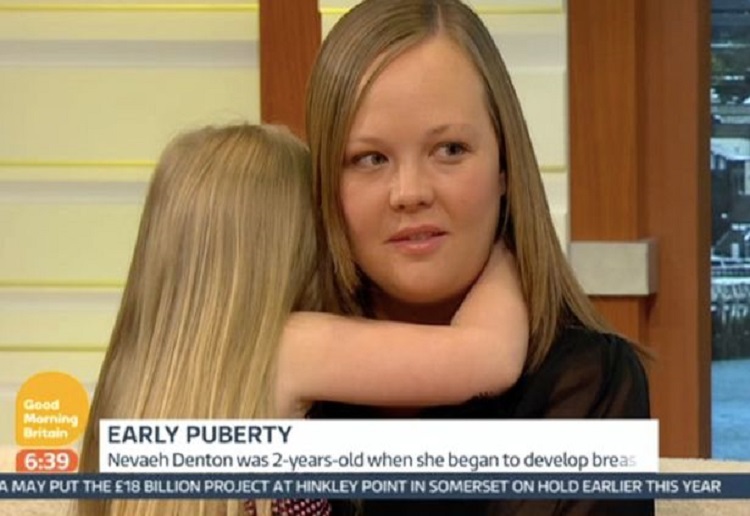 A mother was slammed for parading her “embarrassed” four-year-old daughter on national TV.

The toddler suffers with the rare condition, which affects one in 5,000 children, and developed breasts when she was just two-years-old.

“It was a huge shock,” explained Charlie. “Just after her second birthday, she developed breasts buds. At first, the doctor reassued us she was fine but then she developed second buds.

“She then underwent many tests and we were told she had started puberty. We had never heard of the condition before.”

Nevaeh has an injection every 12 weeks to supress the hormones which trigger puberty.

While Charlie was on the programme to raise awareness, many viewers were concerned for Nevaeh, who looked incredibly distressed during the interview.

The little girl appeared petrified as she clung to her mother’s neck and refused to even look at the camera.

Afterwards, viewers took to Twitter to slam Charlie for making the toddler go on national TV to talk about her “embarrassing illness”.

“Surely you can interview the mum on the subject without parading the little girl in front of the camera who is clearly uncomfortable @GMB,” wrote one.

Another then added: “@GMB Your daughter clearly doesn’t want to be on television. Why are you making her? Poor girl.”

In girls, the telltale signs of precocious puberty include any of the following before 7 or 8 years of age:
•breast development
•pubic or underarm hair development
•rapid height growth — a growth “spurt”
•start of menstruation (her period)
•acne
•”mature” body odour

In boys, the signs of precocious puberty before 9 years of age include:
•enlargement of the testicles or penis
•pubic, underarm, or facial hair development
•rapid height growth — a growth “spurt”
•voice deepening
•acne
•”mature” body odour

Do you think the mum paraded her little girl?