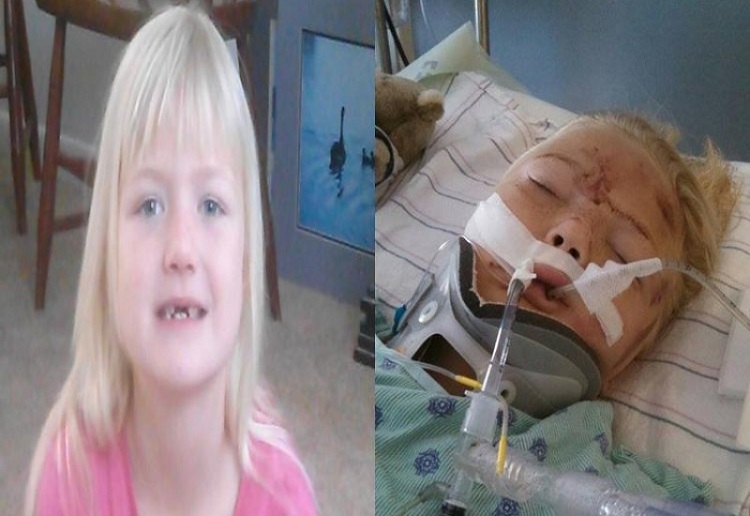 Mum issues plea to every parent out there so they don’t make the same mistake. Be careful with car safety!

Samantha, 6, is lucky to be alive after she survived a bad car crash. She is recovering from several surgeries.

On Sept. 17, Samantha was riding with her dad when they crashed into a tree on Ashland Road in Hanover County.

Mum Shelly, received a call from the police department, “He called, told me that she was already here in surgery, it’s a phone call you do not want,” Shelly remembers. “It’s awful, I mean it’s torture. You know what I mean? Your mind kind of thinks of all sorts of things. They told me she had facial…um a head injury and stomach lacerations and that she was still in surgery and that’s all they would tell me for a couple of hours.”

Dr. Charles Bagwell explained the graphic details:
“”Where you could see the stripe of the seat belt in an enormous bruise across her abdomen, as well as the fact that the edge, the far edge of the belt, had actually cut through her abdominal wall and she had protruding intestines from that. She was just about cut in two. Much of which, quite frankly, couldn’t be repaired. The injury was too severe.””

Surgeons used medical techniques developed at VCU and a binder around her belly – holding her together.

Samantha should have been in a booster seat, but she wasn’t. Her parents thought she had outgrown it. They made another mistake so many parents have seen: Samantha put the shoulder belt behind her, which increased the force of the lap belt on her stomach.

Finally on Oct. 6, nearly three weeks after the crash, Samantha got to go home. Mum, Shelly is helping Samantha do just about everything while the binder around her belly holds her together until she heals.

“Just sitting here, she’s not like in pain, so she thinks she can get up and run and play and she’s perfectly fine. The problem with that is that if she does move, there’s just that little bit of skin holding her all together,” said Shelly.

They have a way to go, but Shelly is helping Samantha each step of the way, because that’s what mothers do.

After all of this, Shelly is urging all parents to understand how to use child safety seats, seat belts, and when it’s okay to move a child out of their safety seat.

“A lot of people seem to think that when the children don’t fit so easily in the booster, that it’s okay to take them out of the booster. That’s not the case,” said Shelly.

“Samantha also moved the shoulder belt behind her. So now the lap belt was carrying twice the force and, because she’s not tall enough without a booster, the lap belt went across her stomach instead of her hips. Doctors call the injury this caused ‘the seat belt syndrome.'”

1.  The Use of any restraint is preferable to not using a restraint. It is the law that each person in a motor
vehicle has their own restraint.

4. Once a child is too tall for a forward facing child restraint, they should use a booster seat with a
lap-sash seat belt until they are tall enough to fit properly into an adult seat belt. While the law allows children 7 years and older to use either a booster seat or a seat belt by itself, a booster seat offers better protection as long as the child fits in it.

5.  For a child in a booster seat or an adult seatbelt, use a seating position with a lap-sash (lap and shoulder) belt in preference to one with a lap-only belt.
6. All child restraints and booster seats must be installed correctly and the child strapped in correctly, according to the manufacturer’s instructions:

b)   Always thread the seatbelt through the correct path (following the colour coding available for
newer restraints).
c)   Ensure there is no slack or looseness in any part of the system. Check the harness straps around
the child, the top tether, the seatbelt anchoring the restraint to the vehicle, and the seatbelt used by a
child in a booster seat.

d)  Check that the seat belt is buckled before each trip.
7. Children 12 years of age and under are safest in the rear seat.

8.Seat belts should never be used with the sash belt under the child’s arm or behind the child’s back, whether they are being used alone or with a booster seat.