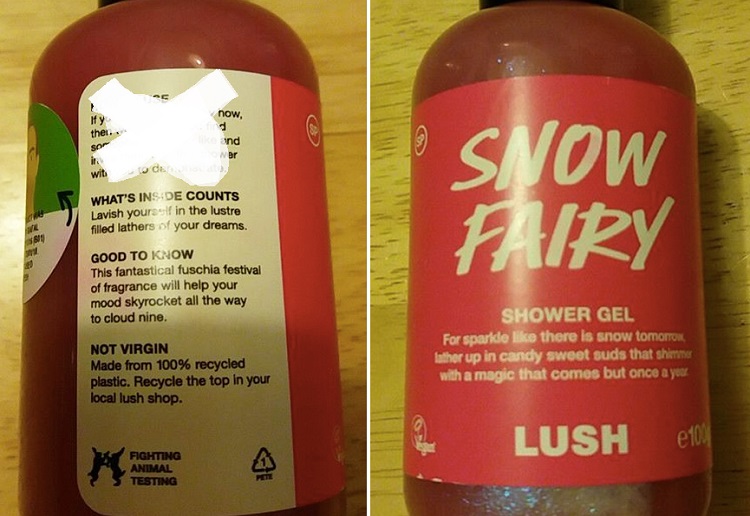 A horrified mother claims ‘inappropriate’ instructions on a shower gel could be used to persuade kids into sexual acts.

Lesley Hughes told The Mirror UK, she was appalled when her daughter, 12, showed her the Lush ‘Snow Fairy’ instructions.

The body wash directs the user to “find someone you really like and invite them into the shower with you”.

Ms Hughes said the glittery wash had been marketed as the perfect Christmas gift for a child.

She felt the ‘lewd’ instructions encouraged sexual acts in the shower.

I was shocked. This product is clearly aimed at young girls, it is pink and glittery. It’s dangerous – people could use it to persuade kids to do things they should not be doing,” the mother from Cornwall said.

“A lot of people have told me to get a life and said it doesn’t mean sex, but for them to even say that it is clearly the first thing that they thought, which shows that’s exactly what it means.

The UK mother said she loved Lush products and had spent plenty of money on them in the past.

She said she was disappointed with the product and wanted the label to be changed.

“I just want Lush to change the label. It definitely will be causing a lot of awkward questions for parents up and down the country,” she said.

The “how you use” section on the back of the bottle reads: “If you really don’t know how, then we suggest you find someone you really like and invite them into the shower with you to demonstrate.”

A Lush Australia spokesperson told 7 News Online they have no plans to discontinue ‘Snow Fairy’ as it is one of their most popular scents.

“Our humour is very traditional British, sometimes in the style of seaside postcards and Christmas pantomime, sometimes tongue in cheek, often self-deprecating,” the spokesperson said.

“Our customers tend to have an innate understanding of this style of humour.”

Lush said they aimed to make adults laugh in times where the young and innocent won’t understand.

“As far as the mixed age of our customers and readers is concerned, we take the same line as UK pantomimes and many children’s films, where a laugh can be inserted that adults will understand but will go unnoticed by the young and innocent.

Lush said they will continue to “always take risks and raise a smile or two”.

DO you agree with this mum? Should Lush change their instructions?