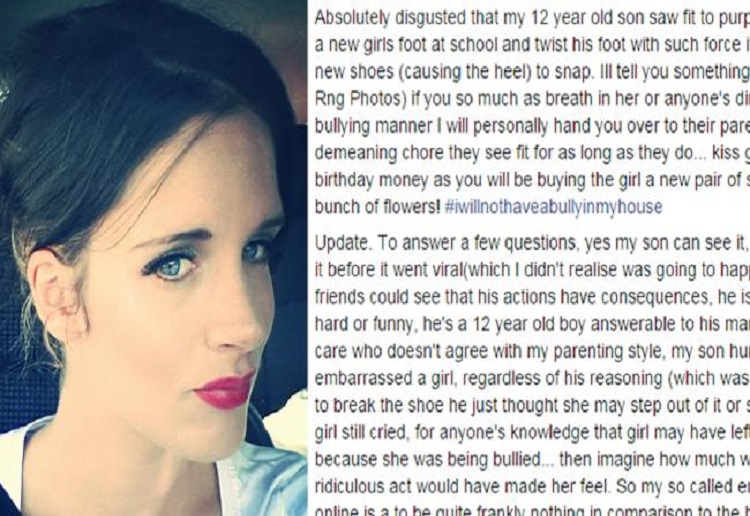 An angry mother who divided opinion after she took to Facebook to shame her son for being a “bully” at school. Now regrets sharing her post publicly.

Single mum Terry Evans made a furious Facebook post last month after her 12-year-old son Jacob stamped on the foot of a new girl at his school, The Sun reports.

In her post, Terry writes that she is “disgusted” at her son, and threatens that he faces big trouble if he “so much as [breathes] in her or anyone’s direction in a bullying manner”.

Terry had initially tagged her young son in the post so his friends would see that “his actions have consequences” but she removed his name when the post went viral.

The original post reads: “Absolutely disgusted that my 12 year old son saw fit to purposefully tread on a new girls foot at school and twist his foot with such force it broke her brand new shoes (causing the heel) to snap (sic).

“I’ll tell you something Jacob if you so much as breath in her or anyone’s direction in a bullying manner I will personally hand you over to their parents for every demeaning chore they see fit for as long as they do … kiss goodbye to your birthday money as you will be buying the girl a new pair of shoes and a bunch of flowers! #iwillnothaveabullyinmyhouse” 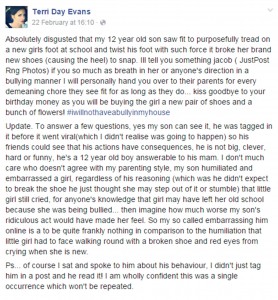 Some people criticised her for shaming her son so publicly, with one commenter saying: “Why extend the humiliation? Your poor son. This will haunt him forever. A mistake at 12, online now for all to see.”

Another commented: “This is an incredibly dangerous thing to do to any child. What is even more disturbing are the huge numbers on here who cannot even see the dangers of what she has done.”

Terry added an update to the controversial post to say she doesn’t care what people think about her parenting style.

The update adds: “To answer a few questions, yes my son can see it, he was tagged in it before it went viral (which I didn’t realise was going to happen) so his friends could see that his actions have consequences, he is not big, clever, hard or funny, he’s a 12 year old boy answerable to his mum.

“I don’t much care who doesn’t agree with my parenting style, my son humiliated and embarrassed a girl, regardless of his reasoning (which was he didn’t expect to break the shoe he just thought she may step out of it or stumble) that little girl still cried, for anyone’s knowledge that girl may have left her old school because she was being bullied … then imagine how much worse my son’s ridiculous act would have made her feel.

“So my so called embarrassing him online is to be quite frankly nothing in comparison to the humiliation that little girl had to face walking round with a broken shoe and red eyes from crying when she is new.

“Ps … of course I sat and spoke to him about his behaviour, I didn’t just tag him in a post and he read it! I am wholly confident this was a single occurrence which won’t be repeated.”

Mum’s regret when reality set in

“So I woke up to reporters at my door today…the post went viral. Did I expect this, no. Hence why the post has been limited. When I posted this status it was about letting my son and his friends know his behaviour was unacceptable, not for the whole world and his dog to see it. This was a first time occurrence for him and I’m damn sure it will be the last.

I stand wholly by his punishment but regret that it went as viral as it did. As for my son, when I told him it went viral and it was in media his comments were “oh well, I’m not bothered” what works disciplinary wise for one parent and child is completely different to another. My son is not a bully he’s an numpty who made a mistake, nipping it in the bud prevented it from becoming an occurrence resulting in him being label one or worse still becoming a bully. Maybe if other parents nipped it in the bud and stopped passing it off as kids will be kids then maybe our next generation of adults will suffer with fewer depressive and anxietal disorders.”

Stand by your choices mums and dads. I think her decision was a wise one, but maybe not a good idea to set it public.

I think as parents it is very important we too need to remember what can happen with stuff once we share it on social media.