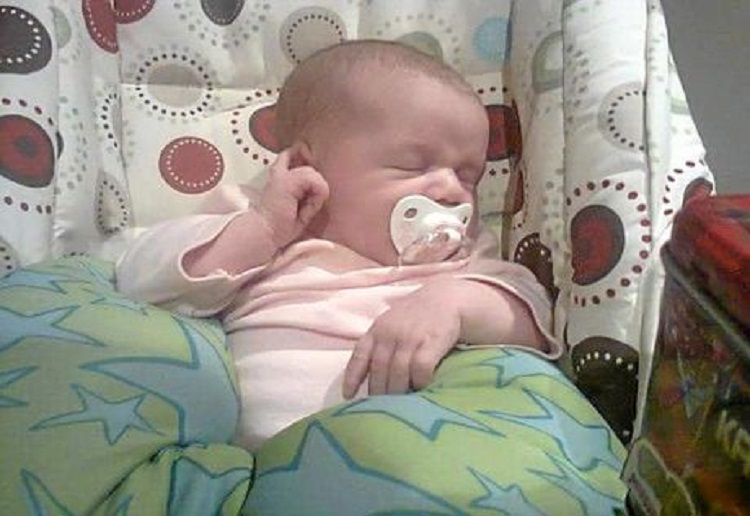 Mum shares her story following the death of baby Paige, who was killed by her own father.

Michael John Humphreys was sentenced to nine years jail for torturing and killing his infant daughter at their Gunalda home in 2012, leaving her with grotesque internal injuries including broken vertebrae and ribs, a fractured skull and a bleeding spleen and pancreas, reports The Gympie Times.

His ex-partner Sarah Mooney was at the courtroom, uncontrollably shaking and sweating at the sight of the man that not only took her daughter from her five years ago, but whose actions led to accusations of Sarah’s role in failing to protect her baby.

She was convicted of failing to provide necessities of life to an infant after her death and has been repeatedly attacked on social media.

Talking to The Gympie Times, Sarah, 26, wants to share her side of the horrific story.

“I did everything I physically could – being in a serious domestic violence relationship – to keep not just my baby safe but my two other children and my mother,” she said.

When Paige was 10 days old Humphreys told Sarah that Paige had rolled off the bed leaving a lump below the little girl’s right ear.

Sarah believed it had been an accident and when she tried to take her daughter to the hospital she was threatened.

“I tried everything I could to take her to the hospital, but I had someone holding me up against the wall by my throat – saying if I did he would be accused of bashing Paige and my two other children would be taken off me.”

“If you’re in a relationship you make excuses for the person who supposedly loves you back.”

“I missed the signs and I’ll do my time for the rest of my life for not standing up to protect her against the things that I now know.”

She said the day before Paige died, at just one month old, she seemed sleepy but she put it down to the heat.

That night she discovered a hand print on her back when she bathed her.

The next morning Paige was unresponsive when Sarah woke – she tried CPR – talked through it over the phone while waiting for the paramedics to arrive but it was too late.

She did not find out the significance of her tiny daughter’s internal injuries until six weeks after her death.

When asked if Sarah believes her ex-partner meant to kill Paige she answered a definite “Yes.”

“He could not physically handle her screaming,” she said.

He could control the older kids by telling them to shut up, Sarah said.

“But because (Paige was) a newborn – that’s how he lost control – he doesn’t like it when he loses control.”

Sarah said she will live with her guilt every day, but said those criticising her need to look in the mirror and say ‘if I was in her shoes would I be able to do anything differently?’

“It is physically impossible to get out.”

Now with the sentencing behind her Sarah says she can finally remember her baby girl for who she was – not for how she died or who is to blame.

Deciding to leave a violent relationship is a difficult decision and requires careful planning and support.

Everyone has the right to respectful, loving relationships and no one should live in fear.

1. Find supportive friends – talk to someone you trust. Do not try to cope alone.

2. Contact a support group – they can offer you direct help through shared experiences.

3. Make a safety plan – include emergency numbers, pack clothing/toiletries, important documents, medication etc in case you have to escape quickly.

4. Contact the police – when you decide to leave – the police can be on standby when you leave to ensure your safety or if you need to return to collect possessions later on.

5. See a doctor – if you are feeling anxious or depressed. Consider talking to a counsellor/psychologist about how the experience has affected you.

6. Recognise your strengths – to create a more positive life. Your skills and abilities helped you leave an abusive relationship and are signs of your capability under intense pressure.

If you need immediate help call 000.

Image via The Gympie Times