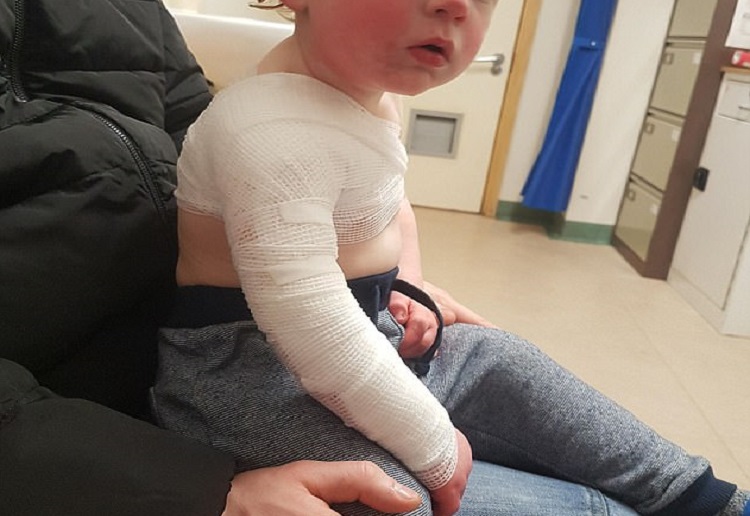 A mother has shared heartbreaking snaps of her baby boy wrapped in bandages after an incident with a dehumidifier.

When Jessica Stoker, 20, woke up to the sound of her 16-month-old son crying, she rushed in to see if he was okay.

The first-time mum who lives in North Yorkshire discovered her baby and all his bedding doused with a ‘greasy’ substance alongside the dehumidifier that usually sits on the 4ft-high windowsill in Logan’s cot.

Jessica believes that Logan must have reached up from his cot in the night and pulled at the Kingfisher Homeware Compact Dehumidifier, pouring the liquid inside over himself, shares Daily Mail.

The care worker claims she hadn’t been aware that dehumidifiers contained anything other than water but seeing her poor boy’s skin knew something wasn’t right and called an ambulance.

However she states it did say to keep out of reach of children, and she thought it was safe where it was kept on the windowsill.

Jessica and her partner Nick Martin, 24, were advised to rush their little boy to A&E where he was treated for severe chemical burns and had to be wrapped in bandages.

Jessica is now determined to share what happened to Logan as every other mum she has spoken to hasn’t realised the danger dehumidifiers pose.

Jessica said: ‘I heard Logan crying and went in to see if he was okay. At first I thought he might just be having a whinge because he’s always a bit groggy when he wakes up but he was really wet.

‘I thought maybe his nappy had leaked but when I picked him up my hands were getting itchy. He was soaked with this greasy, oily liquid.

‘I quickly started taking his clothes off and when I saw his skin was like ‘oh my god’. He was completely red raw all over. He looked like he’d been burnt – like a really, really bad sunburn.

‘Then I saw the dehumidifier in his bed. The only thing I can think happen is that he managed to pull it down off the windowsill overnight.

‘I put Logan in a bath to try to calm his skin down and I called 111. At first they said it might be an allergic reaction because there’s only water in dehumidifiers which is what I thought.

‘But then they called me back and told us to come to A&E. One of the nurses had found some information about there being chemicals in dehumidifiers.

‘Nick rushed back from work and took us to the hospital where they rushed us straight through. The doctor told us Logan had chemical burns.

‘It was awful, he had burns over 80 per cent of his body. I felt horrible, I felt so guilty for keeping it in his room and I didn’t know how much pain he was in or if it was going to scar.

‘They covered him in this special burn cream usually used for boiling water burns and then wrapped him in bandages. It was horrible seeing him like that.

‘All he wanted to do was take the bandages off and we had to force him to keep them on. It’s your worst nightmare as a mum seeing your little one in pain.’

Since her little boy’s accident, Jessica has spoken to many other mums who has similar dehumidifiers on windowsills in their homes and, like her, didn’t realise they contained chemicals.

Jessica wants to stop what happened to her son happening to any other tots and believes manufacturers of dehumidifiers need to place obvious warnings on the packaging.

‘The companies really need to put bigger warnings on the packaging and be clear about what chemicals are in there. I don’t want what happened to Logan happening to anyone else.’

Were you aware of the chemicals in dehumidifiers?