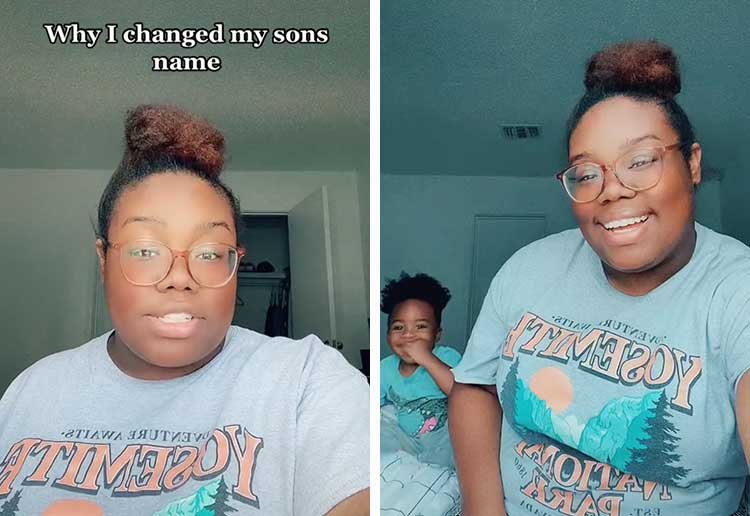 A mum-of-two has revealed why she changed her son’s name when he was eight-months-old, in a bid to normalise ‘baby name regret’.

Aaliyah, who has two boys and is pregnant with her third baby, says her second son has had five different names since he was born, but the family has settled on a name they all love and has officially changed all of his paperwork.

“So I changed my second son’s name when he was eight-months-old, and I changed it because I just grew to hate it,” Aaliyah explained on TikTok.

“There is such a thing as name regret and a lot of people don’t talk about it and I had name regret since he was born. Only one person has ever said his old name correctly. One of my main worries with picking a baby name is I did not want to correct people all the time because that’s exactly what I had to do.”

The 24-year-old expecting mum says when he was born, she and her partner couldn’t agree on a name.

“I wanted to name him Madden and that was my name but his dad would not agree. So we decided on the name Declan. I was never too thrilled on Declan but that was the only name we agreed on. And when he was born I wanted to change his name to Luxer. We changed his name and then we changed it back to Declan.

“So I already knew I wanted to change his name after I heard many people call him the wrong name. So I was searching for names to pick for him. We were going to name him Rocket, Rocket was set, until I came across Rush and that’s his name.”

The name changing prompted several of Aaliyah’s followers to ask whether he ever gets confused about his real name.

“He responds to Rush or Rushy. He has not been called those other names in so long he doesn’t even remember. When his name was Declan, we didn’t even call him Declan, we called him Decy. And I stopped calling him that when I realised that I did not want that to be his name. I did not want him to know that was his name, so we would call him anything other than his name.

“He was called Luxer at birth and was introduced as Luxer to everybody. But we changed his name back to Declan before we left the hospital. His name was never Madden.”

Searching for the perfect baby name?

Take a peek at our beautiful baby name articles for inspo!

Have you ever had baby name regret? Let us know in the comments below.