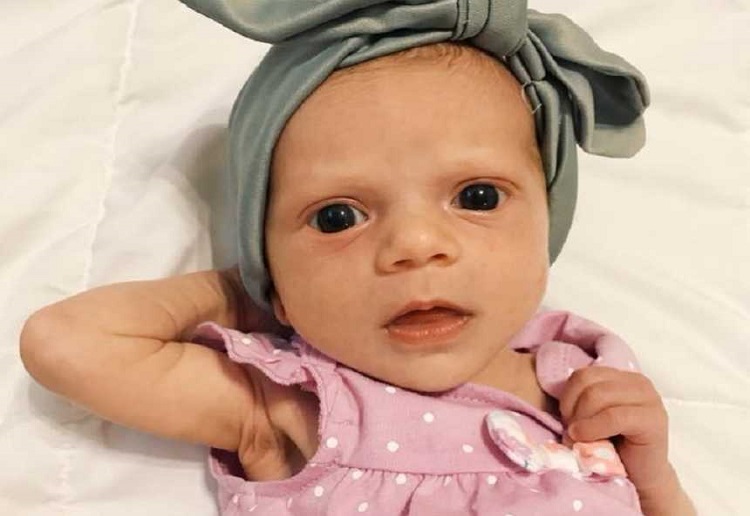 Jordan Talley shares with Love What Matters her heartbreaking experience after watching her baby girl fade away – ‘Her eyes were dull and sunken in, her skin was sagging’

“My main concern when she was born was her blood sugar levels, because that is why my first had a NICU stay. I think I asked the nurse 5 times if they had checked her blood sugar yet.

“She always fell asleep while she ate. I thought it was sweet and assumed she was milk drunk. But for some reason, she seemed to pull away from her latch and scream as if there wasn’t anything coming out. I was starting to get nervous that my body wasn’t making enough milk for her. I told myself that my body was literally made to feed this sweet baby, and knew deep down that it wasn’t a supply issue.

“The next week rolled around and she had gained! Up to 6 pounds, 1 ounce… but not at birth weight yet. I asked her doctor to check and see if she had a tongue or lip tie, because I had read that ties can interfere with breastfeeding — thus interfering with weight gain. He peeked in her mouth and said that she did not have any ties. The doctor told me that he wanted to see her again next week, and that if she hadn’t gained enough by her one month checkup, then we’d have to ‘do something else.’ I knew exactly what that meant. I left the office and cried.

“Two weeks later, she had her one-month appointment. My sweet girl had lost her chubby cheeks. Her eyes were dull and sunken in, and I was STILL having pain every time she nursed. I stripped her down to a dry diaper and walked her to the scale. The numbers seemed to take forever to stop scrolling… but when they did, they read 6 pounds 7 ounces. My heart sunk. Still not at birth weight. I fought against thoughts of failure as we walked back to the exam room. My throat hurt from holding back tears that tried so desperately to escape. I sat down, holding Lucy in her pink and white blanket. I quickly scrolled through my phone to find my firstborn daughter’s one-month weight… she had gone from 5 pounds, 1 ounce at birth, to 7 pounds, 8 ounces by her one-month appointment. On formula.

I choked back the tears as I gazed down at my sweet Lucy, her skin just sagging off of her. Why was I failing?

“The doctor came in and examined Lucy. He said she looked fine, but that my milk probably didn’t have enough calories in it for what she needed. It felt like someone had taken a knife to my chest when he said that. He might as well have said, ‘your milk isn’t good enough for her.’ I knew in my head that my body makes exactly the kind of milk that she needs, because I had researched. I knew that breastmilk is a living substance that changes day to day, or even feeding to feeding in order to meet baby’s needs. He opened the cabinet in his office and there were dozens of cans and types of formula. The first one in the cabinet was the high calorie formula that my daughter had in the NICU… I figured he would go for that. Instead he pulled a little yellow can out and told me to offer her 2 ounces after each time she nurses. I asked if we could fortify my pumped breast milk instead of doing straight formula, and he said maybe eventually we could ‘work up to that’…. Work up to that? How bad of shape was my baby in, exactly?

“I left the doctor feeling completely defeated. I knew in my head that my supply was fine… but couldn’t figure out why she wasn’t gaining proper weight.

“Within minutes of meeting Lucy, she had diagnosed a tongue tie and a lip tie. She watched Lucy eat, and even commented that it ‘definitely wasn’t a supply issue.’ I felt immediate relief. Amanda’s presence, reassurance, and bags of donor breast milk brought me such a peace. Amanda made sure that I had enough donor milk to feed Lucy every two hours. By 9:00 that evening, I could already see a difference. We weighed her with our home scale, just out of curiosity…7 pounds… She had gained 9 ounces the first day. For the first time in her life, Lucy was content.
“Amanda referred me to someone who performed tongue tie and lip tie revisions. With Amanda’s referral and the urgency of Lucy’s situation, we were able to have the revisions performed the next day.

Immediately after the procedure, I got to nurse Lucy.  As soon as she latched, I could feel a difference. It didn’t hurt anymore. Everyone had always said that ‘breastfeeding shouldn’t hurt,’ so I thought maybe I was just a wimp.”

Mum Jordan added earlier today, “If anyone is curious, Lucy is now over 8 lbs and will be 6 weeks old tomorrow!! She is so sweet and perfect in every way!”