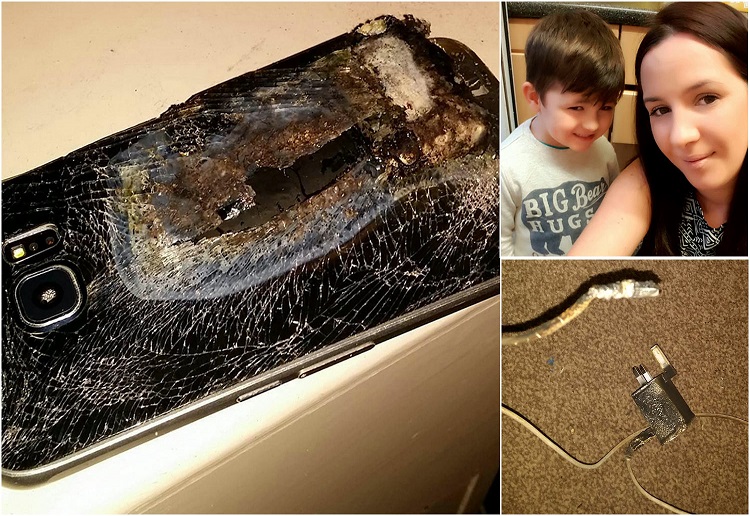 Lucy Pinder, 28, was in bed next to her three-year-old son Joseph with her phone charging on the floor.

“I woke up to a massive bang and the room was filled with thick smoke.

“Joseph was screaming and the smell of burning was unreal,” she told The Sun.

“We were so shaken up. If the phone had been charging under my pillow instead of on the floor, we would have been seriously burned.” 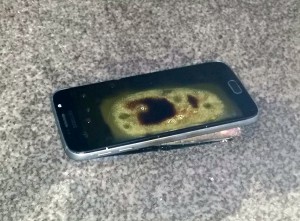 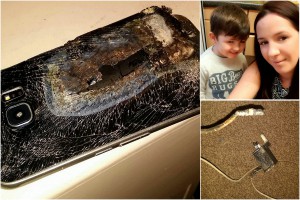 “Now I’m terrified of leaving my phone on charge overnight.”

The phone was sent for diagnostics but the factory couldn’t find out what caused the explosion.

She added: “I want to warn people how dangerous it can be leaving your phone to charge overnight.”

“There are no known safety issues with Galaxy S6 devices,” a Samsung spokesperson told The Sun.

“Customer damage is a potential cause of this incident but as the results of our internal investigation were inconclusive, Samsung has offered the customer a replacement and compensation as a gesture of our goodwill.”

The Australian Mobile Telecommunications Assoc (AMTA) have said
Given the billions of mobile phone batteries and chargers in use around the world, there have been very few reports of injuries caused by malfunctions of genuine handset batteries or wall chargers.

Unfortunately, in the few cases where batteries and chargers have heated up, exploded, caught fire or electrocuted people, the cause is often a poor quality, uncertified or counterfeit battery or charger.

Fake batteries and chargers are often supplied with black market phones and are also sold as after-market products, found on auction websites or in unregistered stores and markets usually sold at a significantly lower price than genuine products.

There have also been rare circumstances in which genuine products have malfunctioned, however in Australia, there have been no confirmed cases of injury caused by a mobile phone battery overheating and fire authorities have no records of any fires caused by genuine mobile phone chargers.

Images via The Sun