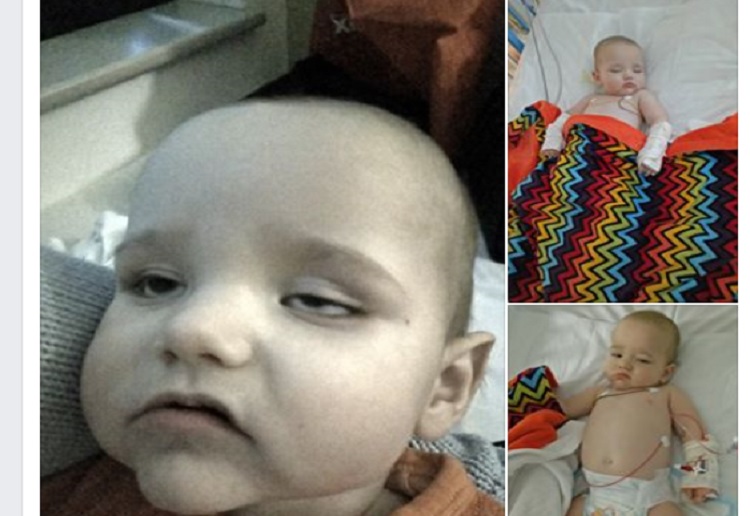 Mum warns parents over hygiene of shopping trolleys after her 10-month-old son contracted a salmonella infection and meningitis.

Vivienne Wardrop, 35, went shopping on September 13 with her baby boy, putting him in a trolley with no second thought.

‘On Wednesday morning I got him out of bed and he had really bad diarrhoea. It had gone through his clothes and bedding,’ Ms Wardrop told Daily Mail Australia.

‘I gave him a bottle and he vomited it back up and this kept happening throughout the day.’

Ms Wardrop took her baby boy to the doctor who told her it was just a virus.

But by early Thursday morning, Logan was so dehydrated she had to take him to Gold Coast University Hospital.

‘[The medical staff] were really good with him and started doing tests, ultrasounds, nasal swabs and urine testing – if it existed he had it,’ Ms Wardrop said.

Doctors diagnosed him with adenovirus, rotavirus, salmonella and meningitis.

Logan, who was born 11 weeks premature, spent 10 days in hospital and eight of those days were spent in the intensive care unit.

‘We were scared we were going to lose. It didn’t seem like [the doctors] were able to get him under control because they didn’t know what was wrong with him,’ Ms Wardrop told Daily Mail Australia.

‘I’d never seen a child this sick, I have five children. He lost 10 per cent of body weight in three days – 800 grams – and went to being bloated because the water wouldn’t go into the cells – it was terrifying.

‘Even talking about it now makes me want to cry.

‘They said it was very unusual to be hit with all those viruses in one go.

‘The poor thing ended up with 10 heel prick tests and bruises on his arms from tests.

‘He was quite lerthargic and his eyes were rolling in the back of his head and he was moaning.’

Ms Wardrop said she had whittled it down to the shopping trolley because Logan had not eaten any normal food other than his formula that week and only had water leading up to his illnesses.

‘We spoke [with doctors] about who had been around, if they had been sick, where we had been, what he had eaten. We hadn’t been out of in the house in a week,’ the mother said.

Ms Wardrop said she did not blame the supermarket for her son’s illness but wanted to raise awareness about the hygiene of trolleys.

‘Us as parents need to think about it a lot more,’ she said.

The mother-of-five felt so passionate about the issue that she posted a warning on Facebook to other parents.

‘Just wanted to warn parents against using baby seats in trolley without wiping down or using a blanket,’ Ms Wardrop wrote on Sunday.

‘Didn’t even think about it just popped [Logan] in and did a quick shop. I hadn’t been anywhere with him in a week so doctors advised only place he could of gotten it.

‘He ended up catching adenovirus, rotavirus, salmonella poisoning and got meningitis because of the strain on his body.

‘Ended up with a central line as his veins were collapsing due to severe dehydration.

‘He was in hospital for a total of 10 days and will still take another week or 2 to fully recover.

‘So please be careful I never thought something like this could happen.’