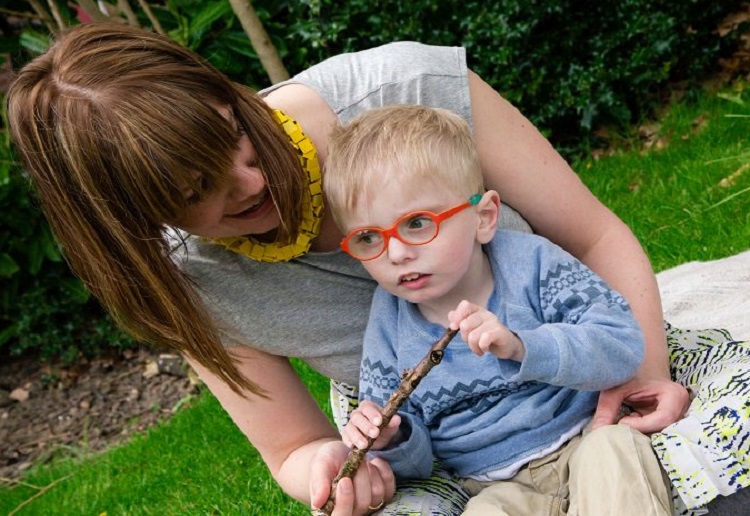 A mum shares her story on Mumsnet with a title that makes your heart skip a beat – “My son’s diagnosis is the first of its kind – it’s exhilarating and terrifying”.

Elizabeth Dimelow shares her story on Mumsnet to mark “Undiagnosed Children’s Day”. She says not having a prognosis for her son’s unique condition means she has to fight for his quality of life.

“One box on a form is never enough. There is no easy answer to the innocuous question “what’s his diagnosis?” More of my son doesn’t work than does: where do I start? 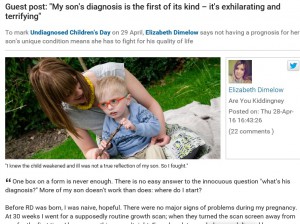 Before RD was born, I was naive, hopeful. There were no major signs of problems during my pregnancy. At 30 weeks I went for a supposedly routine growth scan; when they turned the scan screen away from me, for the first time I knew something wasn’t right. Four days later my baby was delivered by emergency caesarean. The doctor’s comment that they’d “got him out just in time” rung in my ears; how was it the right time when he was so tiny? writes Elizabeth.

He was so weak and poorly for so long; at eight weeks we were told he had Congenital Nephrotic Syndrome. Genetic tests were being run, and soon we would know what type and the best course of treatment. But the tests showed nothing, and RD became frailer – so frail he was expected never to come home.

Elizabeth explains that he defied the odds, and began to grow. He came home. For a long time, his apparent delay in hitting milestones was brushed off as a result of prematurity. The genetic tests didn’t show anything, so all we could do was hope for the best – despite the list of dysmorphic features heading every hospital letter.

I tried to bury my fears about my son, and pretend they were not becoming reality. But I couldn’t continue to act as if our disability living allowance was just because he had a feeding tube. The delays had gone from moderate, to severe, to profound. As each stage progressed, I mourned the one passed.

At five years old, RD hasn’t caught up. He has no recognisable words. He legs are like twiglets that don’t support him.

We now know that he has Congenital Nephrotic Syndrome and Russell Silver Syndrome combined. These are both recognised in the world of rare disease. But this combination is due to a duplication of my chromosome 7, of which I have a gene fault. They know this fault to cause kidney and brain problems in mice – but this is a new diagnosis in humans. Over time they expect to find more cases, but for now my son forges the path. It is a diagnosis with no prognosis. This is in equal parts exhilarating and terrifying.

In some ways, having a label hasn’t changed anything: RD is still RD. But there are times when having a diagnosis – or not having one – really matters. When a simple medication change left RD needing monthly hospitalisation due to gastric issues, and caused him to lose two kilograms of hard-won weight, doctors scrabbled around looking for the cause. Before we had the diagnosis of combined syndromes, it was assumed the problem was a degenerative metabolic condition. We were told to consider palliative options rather than a kidney transplant. By chance, we stopped the medication after a year. The gastric symptoms stopped. His personality returned. Without a clear idea of what was wrong with him, what was actually a reaction to a medicine has been mistaken for a neurodegenerative condition.

I was never ready to settle on a palliative option. I knew the child weakened and ill was not a true reflection of my son. So I fought. I fought for his right to be treated as a neuro-typical child. To be given the best chance of a long quality of life. So here he is, currently on dialysis with the view to transplantation in the near future.

Having a diagnosis also reassured us that any children my daughter had in the future would not be affected. This was so, so relieving. We entered into another pregnancy safe in the knowledge that this was unlikely to happen again.

Some days are harder than I could have ever imagined. When I have to hold my son down to let strangers prick and poke at him, I whisper in his ear so that I don’t cry. When I catch a certain look in someone’s eye, I know that in a split second they have judged him. They can’t see all I’ve learned about him.

In the last five years I’ve learnt a lot. I’ve discovered the true definition of quality of life in RD. He tries with his whole. Everything he achieves is enough. When he loves, he loves with his entire being. He’s a pure soul with the heart of a 90s raver: there are never enough flashing lights or tunes, explains Elizabeth.”