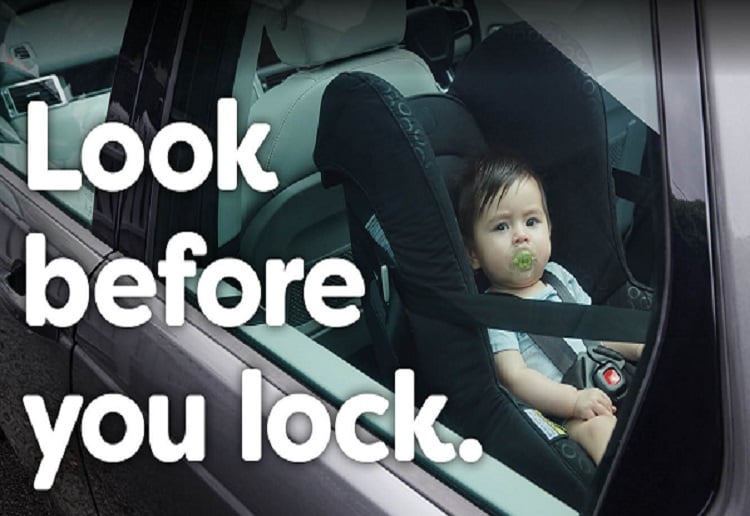 Parents and carers are the focus of a new campaign to raises awareness of the dangers of children being accidently left in cars.

The Look Before You Lock campaign, talks about how extreme exhaustion, stress or a change in routine can bring about the condition, known as fatal distraction.

The campaign encourages parents and carers to develop new habits to minimise the risk, such as leaving your handbag, phone or wallet on the backseat and creating a mental list of the things to check each time they leave the car e.g. baby, keys, wallet, phone.

They explain how short-term memory is used for temporary information, like reminding ourselves to pick up milk on the way home. When people become tired, stressed, distracted, or there is a break in routine, short term memory can fail and cause habitual memory to take over. Parents or carers manage many competing demands every day, and short-term memory is vulnerable when under pressure.

Our short-term memory can only hold five to nine things at one time, and this memory is overloaded, new tasks or distractions from routine mean that some items begin to be forgotten regardless of their importance. No one is immune from this type of memory failure.

For example, an exhausted parent may drive straight to work along their normal route rather than stopping to drop a child off at childcare, inadvertently leaving the child in the car when they arrive.

They are performing a routine task that involves little conscious thought—almost like being on ‘autopilot’—and do not remember that they have forgotten something.

Accidentally leaving a child in a car is sometime known as fatal distraction, and it can happen to anyone.

Unfortunately, the consequences have the potential to be devastating.

In recent times, there have been incidents in Australia and around the world where parents or carers, believing a child to be elsewhere and safe, have unknowingly left a child in a car with tragic outcomes.

There are some steps that people can work into daily routines to help lower the risk of inadvertently leaving a child in a car: