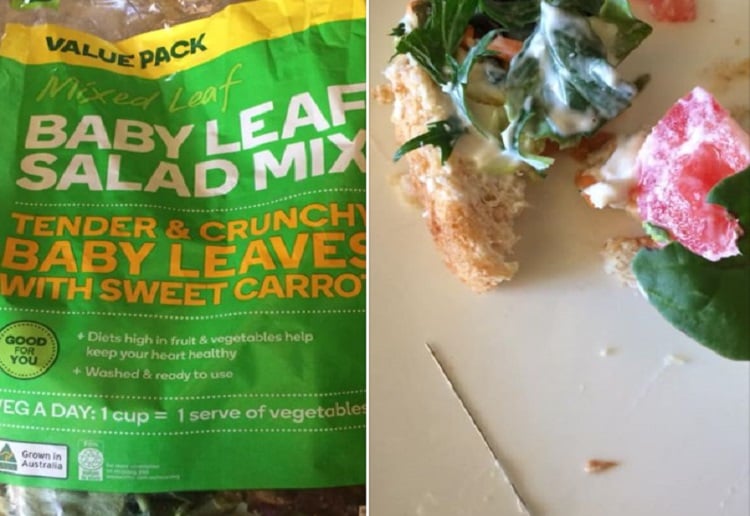 Lady from Narrabeen, NSW issues a warning after discovering a needle in her salad mix.

“It was in a package of salad called Baby Leaf Salad Leaf. All salad products should be recalled but this will take time to get out to media, during which time other people may eat contaminated salad which could cause major injury.” 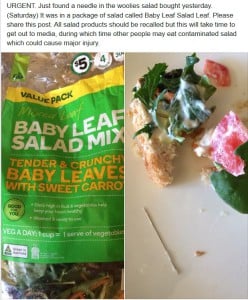 Meg said when her partner Noel, used the Woolworths baby leaf salad to make his lunch on Sunday. It wasn’t until a couple of mouthfuls into eating it he felt something hard and sharp in his mouth, so spat out the mouthful. To their horror it was a 4cm sewing needle!

Woolworths Narrabeen removed the product from their shelves but Meg said she doesn’t know if any other Woolies stores did the same.

She wants people to be aware that in the event of anyone purchasing tampered/contaminated food they should always contact the police and take the product to them as evidence which can then be tested/analysed forensically.

Woolies asked her for the product to be returned to them, with the needle, but Police advised her that it should always be given to authorities.

Meg shared that she was told, “It is a criminal offence and they act as independent investigators and keep a database on all incidents which is integral to determining how widespread the problem is.”

Both Woolworths and Dee Why Police said they would investigate the matter as best they can to try to determine how the needle got into the package, and who put it there.

Police planned to look at cctv from Narrabeen. Police confirmed it was the first reported incident of a sewing needle being found in sealed salad packages.

Another couple also recently shared that they discovered a pin in a banana.

The Facebook warning “Just letting everyone know that I purchased some bananas yesterday from Coles Newport and when I opened one this morning there was a pin/needle in it. Please everyone be aware and check your fruit! I’ve been in contact with Coles and Mona Vale police.”

This comes after a pellet was recently discovered in a pear – read more here.