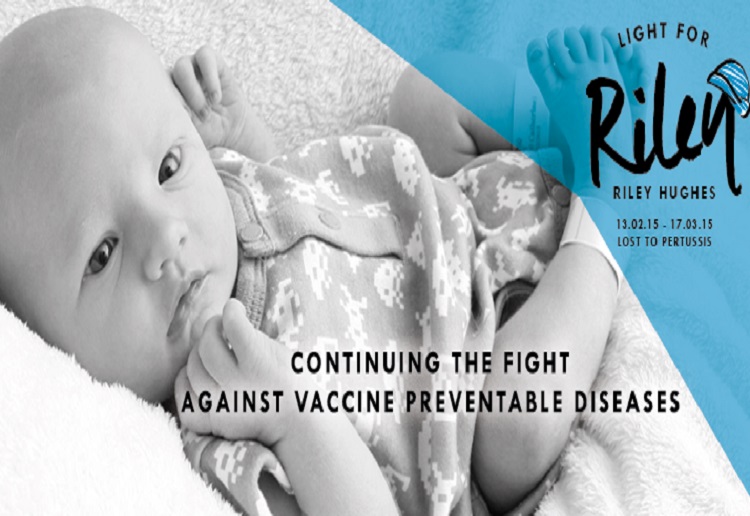 This is beyond outrageous and has our blood boiling along with this poor family.

Light for Riley was setup by parents, Catherine and Greg Hughes, to fight for vaccine awareness following the death of their baby boy, Riley, who passed away in March 2015, from whooping cough at just 32 days old.

Greg has today shared they are angered by a Facebook group that was setup to mock their important cause.

Greg shared on the Light for Riley page today, “Just when you think anti-vaccine lobbyists can’t sink to a new low, last night we were alerted to a page set up, mocking our dead son and lying about us.

“Normally I’m not one to provide any oxygen to pages full of misinformation, however a couple of items on the page caught my eye and so I refused to let this one slip.

The about section of the group states as follows:

Let me give these anonymous liars a fact-check of their own, wrote Greg.

“We have NEVER accepted funding from pharmaceutical companies. We are run by volunteers, nobody is paid a wage and our activism has only come at expense to us. For the most part we have poured our own money and efforts into the campaign with the two primary motivations being to honour our son and to ensure no family endures the heartache we suffered.

“Further to this, posting misinformation and mistruths isn’t actually fact checking – it’s lying. Neither myself nor Catherine would ever publish anything we felt was controversial, dubious or unproven. We have been enormous advocates of the maternal booster because science and evidence shows it’s incredibly successful in protecting those members of the community who are most vulnerable to whooping cough – newborn babies. The ‘fact checking’ I’ve seen so far has been primarily attacks on my family.

“This page also states we don’t allow ‘differing opinions’. For clarity we don’t allow misinformation and baseless claims. Many parents who come to our page are doing so because they are unsure about vaccination requirements. They sometimes bring with them concerns surrounding misinformation they may have heard. The last thing we will do is allow a voice that posts misleading, false information that may further convolute the situation. If you don’t like that your information isn’t heard on our page, post it on your own page. Vulnerable parents are entitled to accurate information based on fact not falsified cherry picked data and magical pixie cures pushing alternative products that don’t work.

“My son was real. The hurt we have all experienced from his loss is immense and to suggest we ‘promote his death for profits’ is insulting. “

“My son was the light of my life. He was everything I’d ever wanted and I had plans for the most incredible future which revolved around him and my daughter Olivia wanting for nothing. This future was cruelly ripped away by a preventable disease. The worst part of this whole situation is knowing that if we’d been provided access to the maternal booster during pregnancy, in all likelihood I would still have my son today.

“Setting up Light for Riley was a legacy of love and our only wish was to ensure that no family would ever have to suffer the fate that mine did.”

“I have a Riley sized hole in my heart that will never be filled and I still spend most days knowing that I’ve been cheated of some of the most amazing experiences with one of the most incredible little human beings I’ve ever had the pleasure of spending time with. I will likely never have a son – I don’t want other families to have to say the same thing.

“My family didn’t choose this life. I would give every worldly belonging I own to have just one more day with my son. To witness the cruelty and callous actions of a group of ignorant fear mongers who want nothing more than to prey on the vulnerable and vilify the bereaved to further their own agenda is nothing short of vile.

“I will never stop advocating for strong public health policy and nor will I stop advocating in honour of my son. What I will start doing however, is calling out the abject cruelty of individuals whose actions may potentially harm the wellbeing of other members of the community.”

Thank you to all our wonderful supporters, your voices are always the ones which resonate loudest.”

Greg has previously shared just a snippet of the abuse they receive ongoing from antivaxxers. It is disgusting behaviour towards a grieving family.

Unbelievable! Some people seriously have nothing better to do.