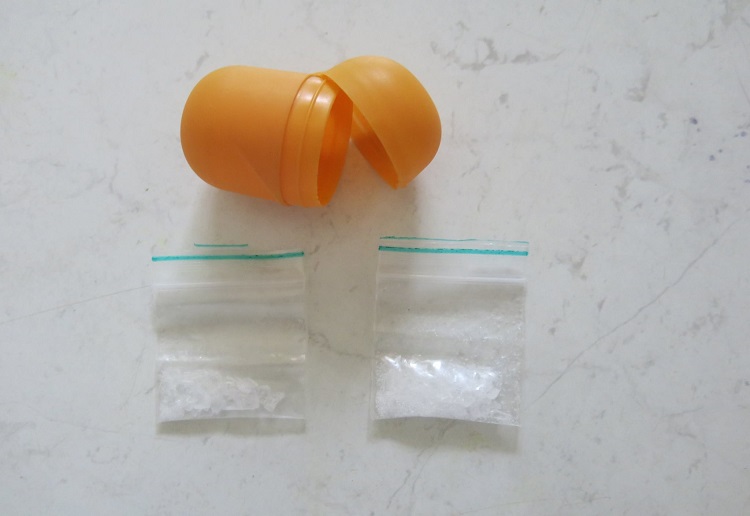 Crystal Hill wrote a public Facebook post urging others to share her story in the hopes that parents become aware of this potential danger to their children.

I was cleaning out Jonah’s room (aged 6 ) on Friday and inside his old school bag pocket he uses for play I found a kinder surprise container. I opened it and found 2 little packets with what looked like big chunky salt crystals. At first of course I was shocked and tried to think where the ….. did that come from!? I showed Dan when he got home from work and he too was of course shocked!

After school we got the kids together and asked where it came from. Jonah has an amazing memory and recalled finding it in the gutter at a local second hand store ( weeks ago )….innocently he assumed it fell out of the car (with the amount of crap they stash in the back seat it was a highly likely scenario) he then just popped it in his pocket. Fortunately and thank God he didn’t taste what he assumed was just salt Crystals.

We took it to the police station who congratulated Jonah on the fact he didn’t eat it and he and Kyah scored some stickers. Filling out the form was a bit funny when they asked if we would like to claim our item if no ones else does haha Dan’s reply was “so you can arrest us when we walk out of the place?”..( On all forms when you hand anything in to police it has this question, so we all had a chuckle).

Anyways this may be a good time to discuss this stuff with your youngens… I thought we had already covered this subject as they clearly know about no touching needles or pills but salt like crystals (meth) was new to us!!”

Her husband Dan also wrote, “We’ve talked about drugs but as far as he knew he had two bags of salt. So so lucky he didn’t eat them or we would have lost him without doubt. He was a total mess when we told him what it was, he had no idea. Hoping other parents have the talk and keep our kids safe as this stuff is everywhere and isn’t going away.”

Dan added, “Please share. The more parents that see this the better. This could have turned out so much worse. We are so very lucky. We just want to keep kids safe as this stuff is everywhere and it’s not going away”

In June we shared the story of a young boy who was shocked to find a kinder surprise plastic egg also contained drugs instead of toys. Read that article here.