Article You can’t just leave him in some random hole somewhere, it’s not right 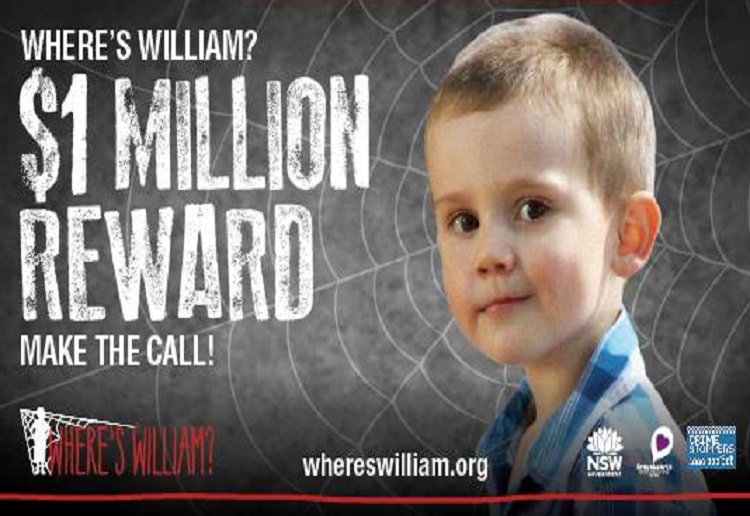 Two years since he mysteriously vanished from his grandmother’s yard there’s still no clue about what happened to William Tyrrell.

William Tyrrell’s family are pleading with the person who took their son to show them where he is, even if it means leading them to his body.

William’s family have made a heartbreaking appeal to those involved in his disappearance to give them closure, reports 7 news.

His parents, who can’t be named for legal reasons, told The Daily Telegraph that they remain hopeful William is still alive but know they face the terrible alternative.

“To that person, even if William is dead, even if somebody killed him – deliberately or if it was an accident – and you know where he is, he’s got to come home,” his mother said.

“If William is dead then you can’t just leave him in some random hole somewhere, it’s not right.

“His remains need to be acknowledged and signposted that this is where he is.”

“He wasn’t yours to take. You don’t go around stealing children,” she said.

The mother said the money is “a million dollars of freedom” and the person who knows information can make a break and ultimately has a “get-out-of-jail-free card”.

The Tyrrell family said they are hoping that William’s abductors have kept him and are caring for him.

Last week Police launched a $1 million reward for any information that leads to his recovery.

Police announced a $1 million reward in a bid to break the mystery. “That’s one million reasons why somebody that’s out there that knows what’s happened should come forward and talk to us,” Police Commissioner Andrew Scipione said.

“It is a unique announcement here in New South Wales. We’ve never had a $1 million reward ever before,” Mr Scipione said.

NSW Premier Mike Baird said every resource has been given to this investigation and this is another avenue to bring William home.

“This is a little boy who has been tragically missing from his family for two years – someone out there knows what happened to William and it’s time they came forward so he can be returned to his mum, dad and sister.

“This reward is being announced for one purpose only, the recovery of William. If you know something, don’t wait for the police to find you, come forward now.”

The three-year-old was last seen playing in the front yard of a house in Kendall on the morning of September 12, 2014.

On the two-year anniversary of his disappearance from his grandmother’s garden on September 12, 2014, The Sunday Telegraph asked respected facial anthropologist Dr Susan Hayes to construct an image of how William would most likely look today.

Dr Hayes said William would have likely gone through a “big growth spurt” since he was last seen.

“What I found in my ­research is that there is a big growth spurt between three and four years and children change from being distinctly baby-faced, with a little face in a big round head with tiny little noses and hardly any chin,” she said.

“At around three or four years, that all changes and their jaw gets bigger, they’ve got teeth coming through and their face all moves forward and downwards, the nose gets bigger, the eyes get bigger and the whole face looks bigger in proportion to the whole head,” said Dr Hayes.

If you know anything about William’s abduction, please call Crime Stoppers NOW on 1800 333 000 or contact their online reporting page nsw.crimestoppers.com.au.