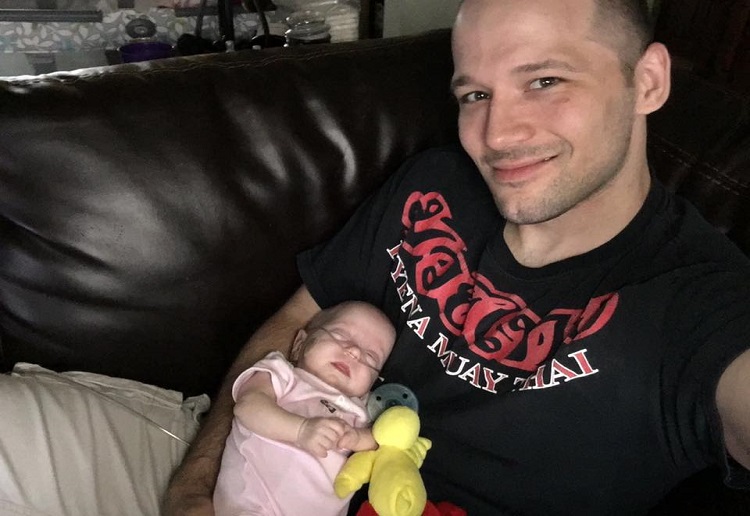 Dad admits raising a preemie is so much harder than being a police officer and professional Muay Thai fighter.

Dustin Johnson, a 10-year veteran police officer and professional Muay Thai fighter has a message for husbands whose wives stay at home to care for their children.

“All my married with children dudes on here listen up,” Johnson wrote in a Facebook post…“After having to be a stay at home parent since February, I got a public service announcement. If you’ve ever given your wife grief about being home with the kid all day while you slaved away at work, you go straight home and apologize.”

“Professional Muay Thai fighter and 10 year veteran cop …absolutely beat down by fatherhood of a preemie,” he added in the comments on his post. “I’d give my right arm to be able to work 40 hours right now. Work would seem like a vacation lol”

“I’ve been a cop for 10 years and I swear work seems like a vacation compared to how hard this has been,” Johnson told Scary Mommy. “Ivy was born at 26 weeks and was 1.2 pounds. She was very growth restricted and my wife developed severe preeclampsia. It had to be an emergency c-section or I was going to lose both of them.” Ivy spent four months in the NICU before she was released home. Johnson says after her release it “just made more sense for me to stay home with her for us.” His wife, Darcy Johnson, is a clinical scientist and is now back at work while he cares for Ivy.

“I tip my hat to you ladies,” Johnson concluded in his post. “Only a couple months of this has damn near killed me.”

Well that says a lot really doesn’t it? It is not an easy gig at all!