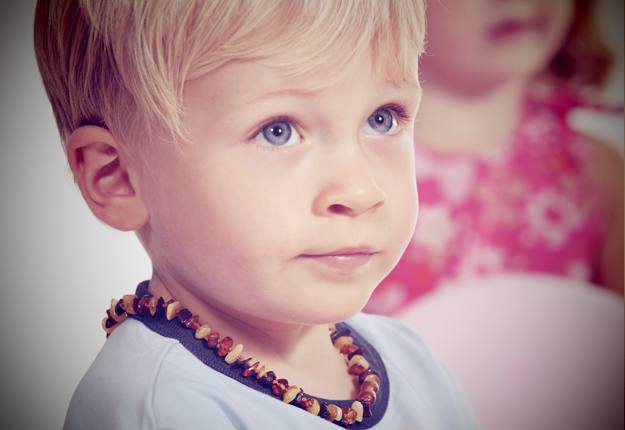 Debate has started following the tragic story of a baby strangled by the necklaces, yet still we see many babies with these dangerous necklaces on.

A US mother is suing Etsy after her son was sadly strangled by an amber teething necklace purchased from the popular online store.

Deacon Morin was found unresponsive at a childcare centre on December 10, 2016. It is alleged he was strangled to death when the teething necklace he was wearing tightened and did not release as advertised. (read more here)

Despite the lack of real evidence the amber beads have any effect on the body whatsoever, anecdotally, many families report seeing an improvement in the symptoms of teething when using the necklaces.

We asked mums how they felt about amber necklaces and got some very mixed responses.

In our Facebook poll with over 3100 votes the huge consensus was a NO to using them.

With 76% of voters saying no, compared to 24% saying yes they would still use one.

One mum said, “They’re a lot like every other baby product out there. When used correctly, they are fine. When used incorrectly, they can be dangerous. My son had a bracelet/anklet and I don’t think it did anything for him, but I’ve had many people swear by them being their saving grace for teething kids. It’s an each to their own scenario, just like everything else.”

Another mum agreed, “When used correctly they are safe. The issue is when they aren’t used correctly. Kids drowned in pools every summer. Those drownings are preventable too but you don’t see people not using pools because of it.”

Another said, “I don’t use the necklaces but I use the anklets and they are amazing and I strongly believe in them.”

Another admitted, “I wouldn’t put any type of necklace around a babies neck, no matter what it promised to do!”

“Would never and will never use them”

“Think it’s a load of rubbish.”

“Kids choke from hot dogs grapes and fall from walkers. Car seats aren’t infallible either. It’s all about using. The product properly and I don’t know if it helps. All I know is that she’s not screaming when she chomps now so I’ll take whatever it’s doing if it helps her.”

“There is no scientific evidence that these necklaces actually do anything. Sad that babies are losing their lives due to them.”

Red Nose Australia does not recommend the product saying,  “They do not recommend placing anything around the neck of a sleeping baby as this could tighten during sleep and make breathing difficult and may even strangle baby.”

“Furthermore, strings of beads could break and individual beads could end up in a baby’s mouth, presenting a choking hazard.”

Consumers using this product are advised to:

Do you think they are a dangerous risk?