Article The video that has split opinions across the globe 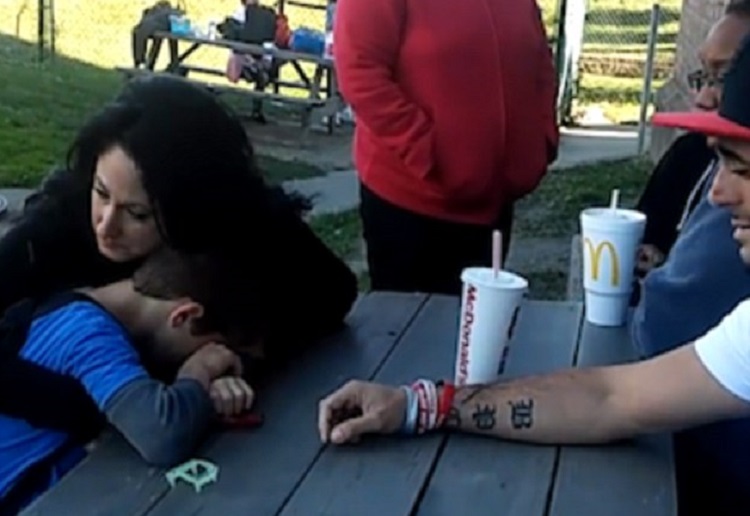 Father films the heartbreaking moment he tells his son, eight, that his mother overdosed on heroin – then puts it online for millions to see.

The video shared on Facebook and YouTube, shows the father telling his eight-year-old son his mother has died of a heroin overdose. Of course the boy’s reaction is absolutely heart-breaking.

Brenden Bickerstaff-Clark posted the video on YouTube and it soon went viral, with many people on the internet whether he had the right to show the world the pain and suffering of his son, reports Daily Mail.

In the video Mr Bickerstaff-Clark,  from Youngstown, Ohio, and a friend sit down at a picnic table with his son, Cameron.

‘I have something to tell you, OK?… Mommy died last night,’ he tells him, as he holds his hand across the table.

‘What? What do you mean, my mom? How?’ asks the shocked youngster.

The boy suddenly breaks down and weeps and Mr Bickerstaff-Clark’s friend hugs him.

Mr Bickerstaff-Clark then gets up and climbs over the table, adding: ‘I love you. Do you need a hug?’

He then embraces his devastated son before turning to the person filming it and telling them: ‘That’s enough’.

Mr Bickerstaff-Clark wrote on Facebook: “This is for any and every addict with children. Today I had to tell my 8 year old son that his mommy died from a drug overdose last night. This is the realization and reality of our disease. Don’t let this disease have to make someone tell your child that you’re dead because of drugs.

‘This was one of the hardest things I’ve ever had to do. My son has no mother because of heroin…kinda hard to hear but u can hear what we’re saying. Please get help so our children don’t have to suffer.’

Mr Bickerstaff-Clark goes on to deny it was staged and says: ‘I am a recovering addict myself with 94 days clean today…please share n help maybe help save a child’s parent’s life.’

The film has been viewed more than 14 million times on YouTube and around 29 million watched it on his Facebook page, where some criticized Mr Bickerstaff-Clark.

Many commented along the lines of, ‘To put a moment like this online for the whole world to see is just ridiculous. That poor poor kid. I couldn’t help but tear up!”

While others argue it is the reality of a drug epidemic that needs to stop!

We have chosen not to include the video in our post. But it is certainly not hard to find if you really want to view it.

Our hearts break for this poor little boy. He didn’t deserve this.

Do you agree with the reasons behind why this dad shared such a personal moment?