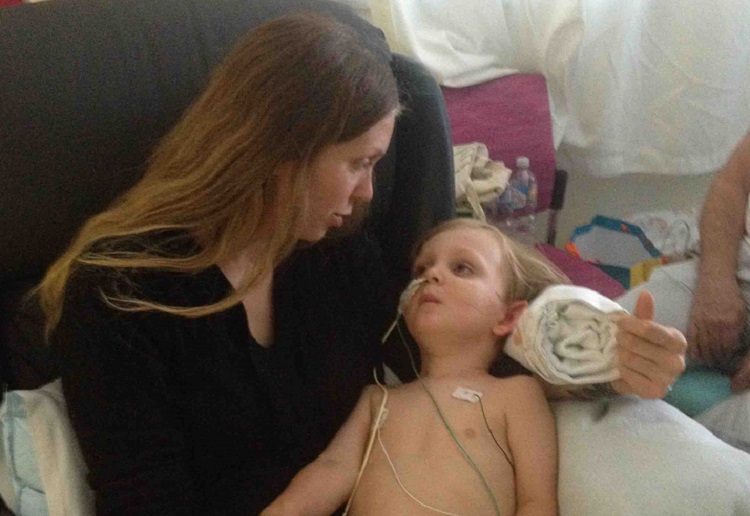 The parents of a two-year-old boy who was bitten by a taipan have revealed that their son is slowly reaching some amazing milestones.

The parents of the North Queensland boy who was bitten three times by a Coastal Taipan over three months ago have posted an update to their sons Go Fund Me page, the exciting news that Eli passed an eye test.

“Eli took his first unassisted steps 2 weeks ago … He is currently sitting, standing and walking (a little awkwardly) on his own,” they revealed.

But then went on excitedly to say, “Now for the best news we could hear as parents, Eli passed an eye test for any standard 2 year old, brain-injured or not,” Eli’s parents shared.

“He was able to demonstrate fixing on an object and following it with both eyes and with each eye individually.

“He was also able to pick up very small objects placed in front of him. We still don’t know if he is able to see in colour, that will be something that can be assessed later.”

His mum, Brittany, also said, “An amazing moment for Giles and I was while walking along the Brisbane River at South Bank, Eli looked at the water and said “ocean” (Ocean is what he used to call most bodies of water before the incident). We just looked at each other with teary eyes and said ‘he can see’.”

They also shared the amazing news that Eli will hopefully be home for Christmas, “We are looking at a discharge date Friday of next week (which would be 9 Dec). Giles and I have rented an apartment down the street from the hospital which we intend to be in for at least the next 6 months so Eli can still access the best care in the area and his brother will also be born in the hospital next door to the Lady Cilento.

It will be amazing to have our boy at “home” with us so we can start to rebuild our lives together again.”

We hope Eli continues to reach some more amazing milestones.

The parents of the North Queensland boy who was bitten three times by a Coastal Taipan in Agnes Water last month have posted an update to their sons Go Fund Me page. Eli’s parents Giles Campbell and Brittany Cervantes are by the two-year-old’s side during his recovery.

Eli is undergoing his first week of therapy to gain strength and control of his head and neck muscles, as well as relearning the most basic tasks such as sitting up straight and swallowing.

“His therapists are incredible with making him feel safe. Its in this chair we see the most smiles and hear the most giggles,”they said.

“This past weekend, Eli managed to sit out of bed for an hour and a half up to 3 hours! We would just do laps in the ward because if we stopped he would let me know how he felt!

“Eli finally felt the sun on his skin and the wind in his hair for the first time in 3 weeks.

“It was beautiful to see his eyes again.”

Mr Campbell wrote earlier that Eli had suffered from significant swelling on the brain, and was largely immobile.

“Giles and I are constantly battling memories of the past of our energetic, playful, hilarious, sensitive but strong little boy.

“They creep up on us at times during his sessions when we see our boy limp in someone’s arms as they carry him from bed to his stroller and while songs are being sung that he would normally sing along to.

“We also realize that our boy has been incredibly strong and determined since the day he was born.

“I trust that there is fight in Eli, Giles and I see glimpses of our boy in that little body every day. We are here for him, every step of the way.”

Eli has remained in a Brisbane hospital in an induced coma after being bitten three times by one of the deadliest snakes in the world, a taipan. reports 7 news.

He had to be revived by paramedics when bitten by a coastal taipan, on September 26, while collecting eggs from the chicken pen in the backyard of his home at Agnes Waters.

The toddler ‘died for six minutes’ before being revived by paramedics.

Snake experts say Eli is lucky to be alive following the bite as the coastal taipan is among the six most venomous snakes in the world, and children are far more susceptible to their bites.

Richie Gilbert from Sunshine Coast Snake Catchers 24/7 said Eli’s mother Brittany applied a pressure bandage to the wound straight away and in doing so saved his life.

Eli’s mother shared an update on her son’s condition writing, “Eli has suffered some brain damage as a result of his cardiac arrest and subsequent lack of oxygen to the brain. We won’t know the extent until he starts to come too a bit more.”

“He is very sensitive at the moment, very easily over stimulated. Speaking with Neurology Dr today, she is gathering her team to run all his necessary tests and start his rehabilitation ASAP.”

“The area of his brain that has been affected the most is the occipital lobe, responsible for interpreting what he sees, so our spectrum is from Eli being unable to recognize objects, to hallucinations, to blindness. He also may have some motor function impairment. We have no idea the extent but we also have no expectations. We are now ready to walk this path with our little boy, the past is the past and he is changed forever. So are we.”

A GoFundMe page has been setup to help Eli’s parents Brittany and Giles stay in Brisbane to assist his recovery.