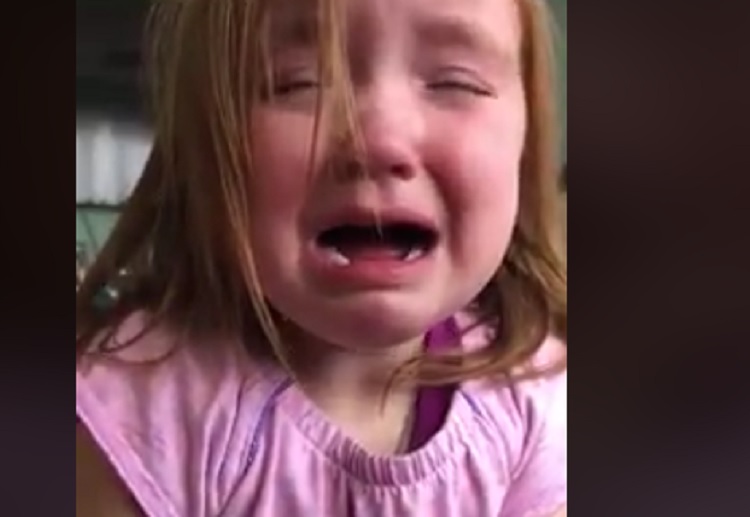 This sweet video of a very cute (and very tired) little girl has sparked a massive online debate.

The little girl is upset because she can’t stop thinking about waffles. It is getting very distressing for her towards the end. She appears so overwhelmed and most likely very over tired as mum does ask her if she needs a nap.

I watched this video last night and thought nawwww poor little poppet, I just wanted to give her a hug. Then I scrolled down to the comments. Oh my word! I was so shocked to say the least.

Watch the video below, and see what you think yourself before reading on any further for comments…..

OK so you watched the video? What did you think?

The video has attracted over 2 million views and nearly 13,000 comments.

Prepare yourself for some of the comments that this sweet video attracted.

Sherri said, “This is not cute. Teaching your kids to whine and cry for what they want is why we have a world full of spoiled entitled brats.”

Christina said, “So she’s suppose to learn that acting like that gets her what she wants? Nope not today!! No waffles for you until you stop acting like a brat.”

Brendan said, “Wonder where she learned to act like that? I put a stop to that whining with my kid asap. You are the parent, not them. They do not dictate what they shoulf be eating… and it certainly shouldn’t be waffles all day.”

Joyce said, “no that’s not adorable that’s what’s wrong with this country rotten spoiled and grows up the same way pick her up and slap her on the back side.”

Heather said, “That baby was tired and emotional. That’s not a tantrum. Tantrum is kicking and screaming and being unreasonable. She was expressing her emotions. She got up to cuddle and seek comfort from mom at the end. Some of you people need to learn empathy.

Michelle said, “I don’t think she was being a brat. She loves waffles, and she was having difficulties expressing her feelings. She IS A CHILD. While parent should have gently remind her to behave better and the reward will be waffles.”

How did the video make YOU feel? Was she being a brat, or just feeling very overwhelmed at that time?