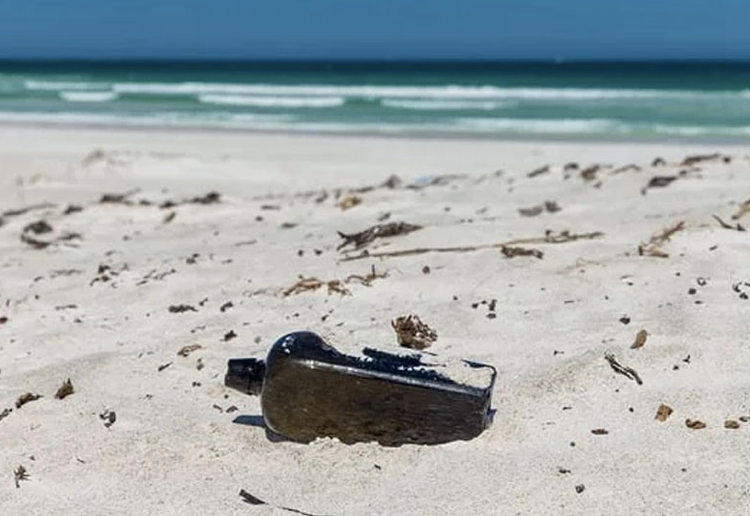 The message in the bottle is 132 years old!

It has the makings of a romantic movie – a woman was walking along a beach when she discovered an old-fashioned bottle half-buried in the sand. On closer look, she noticed a small rolled up note tied up with string inside the bottle.

That bottle had been thrown into the sea 132 years ago and has become the world’s oldest known message in a bottle.

Sadly (for those romantics amongst us) the note wasn’t a tragic poem or musings of a life lived long ago – the message was penned by the captain of the German ship “Paula” in 1886, who wrote the date the bottle was thrown aboard, the co-ordinates, the name of the ship, its home port and travel route.

According to news.com.au, from 1864 until 1933, thousands of bottles were thrown into the sea from German ships to gain a better understanding of the global ocean currents and find more efficient shipping routes.

The bottle was uncovered by Tonya Illman on the Western Australia shores, just north of Wedge Island, 180 kilometers north of Perth.

Illman told her story to the Western Australian Museum:

“My friend Grace Ricciardo and I were walking across the dunes when I saw something sticking out of the sand so I went to take a closer look,” Illman was quoted as saying by the museum.

“It just looked like a lovely old bottle so I picked it up thinking it might look good in my bookcase. My son’s girlfriend was the one who discovered the note when she went to tip the sand out.

“The note was damp, rolled tightly and wrapped with string. We took it home and dried it out, and when we opened it we saw it was a printed form, in German, with very faint German handwriting on it.”

The museum and the German Naval Observatory have confirmed the authenticity of the bottle.

“Incredibly, an archival search in Germany found Paula’s original Meteorological Journal and there was an entry for 12 June 1886 made by the captain, recording a drift bottle having been thrown overboard,”

“The date and the coordinates correspond exactly with those on the bottle message,” he added.

Illman has loaned it to the museum to display for the next two years.