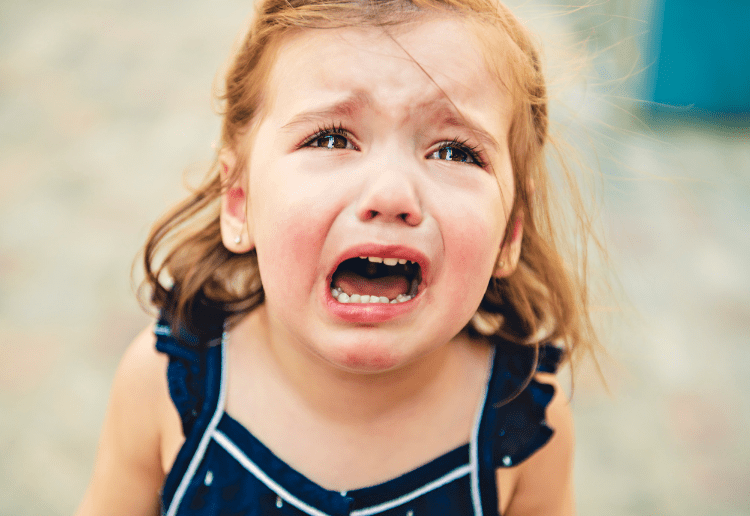 When your child has a tantrum, they’re not deliberately behaving badly. Instead, they’re trying to tell you, “I can’t cope or deal with this.”

So let’s look at what are the possible causes of tantrums:

A tantrum is caused by a child being overwhelmed by something, so if your child is frequently having tantrums in a particular environment, then stop, step back and look at what it is in that environment that causes it.

Are there too many people?  Is your child being overwhelmed by noise?  By the size of a place?  By colours or movement?  By the feeling of being touched or knocked by other people too much?

Meltdowns in grocery stores often happen because the child is overwhelmed with desire for certain things on the shelves.

If this is your child and it happens, then I promise you not everyone looking at you is judging you, if they are parents they feel your pain. You are in the tough position of needing to pacify the tantrum in public, whilst trying not to give in.

If this is your child, then stop, step back and think about the overload they are telling you about.

Do the public meltdowns happen after a certain amount of time?  If so start with shorter shopping trips and then slowly extend the time as you TEACH your child to cope with the desire of immediate need to help them wait until you are out of the store.

Seriously danger is real, fear can be dealt with, so if the cause of your child’s tantrums is fear, then stop and think about how you can help them to learn to see the danger but not feel overwhelming fear.

Are the tantrums related to particular people?  Are they done for effect?  Are they related to an argument with siblings?  I work with some families where only one parent reports a child having tantrums.

I often ask them ‘what happens if you ignore it?’  9 times out of 10 they say nothing, but sometimes they say it gets worse.  If it’s a tantrum to ignore, then ignore it, if it gets worse, then nip it in the bud!

Is there a pattern?  Do tantrums always happen at the same time or when you do the same thing?

If so it’s likely that your child is struggling with something associated with what’s happening at that time.  For example, if it’s related to times when you are leaving the house (transition), then try a countdown before you leave so that your child is prepared for the upcoming change, or try having everything lined up by the door ready to take.

If it’s related to a particular day, then what happens on that day that overwhelms the child?

For example, I recently worked with a family where the parent works one night a week and this could have caused the child to be anxious about her mother being out, so she became overwhelmed on these days and had lots of tantrums.

5. What people have said to the child

Think about the phrases that you or your family use.  Is there a particular phrase that always results in a meltdown?  How could you rephrase it?  Is ‘go and tidy your room’ results in a tantrum every time, then try ‘what would you like to do after you’ve tidied your room?’

On my website I talk a lot about Talk Tennis, the argument you know the outcome of when it starts and how to break the same verbal tennis match.

Being a parent is far busier than any job I am aware of, you have to think of twenty things at any one time.  So it is easy that consistency gets lost.  But when you are two or three and told you can have a lolly, then told you can’t, then told you have to wait for dinner, it’s a little bit confusing.

So honestly, if you’re worried about tantrums, then consider if they are caused by the expectations brought on by lack of consistency.

None of us are consistent all of the time, so admit when you’re not.

One of the biggest things I see cause tantrums of children and adults is their inability to communicate effectively.  I mean properly, emotionally communicate.

The ability to recognise and express your emotions is a major way of avoiding tantrums.

When you can see it brewing up in your child, then say something like ‘you look angry, I can see your face is red and your shoulders are hunched.’  Help your child by naming the physical messages their bodies are giving out, this will help them to recognise what their emotions feel like.  At the end of the day, it’s far better for someone to be able to say ‘I’m angry’ than to punch someone or throw things, so help tomorrow’s generation by starting that today.

Children are just that children.  We are adults, we do not need to win every battle, we are not dictators (seriously if you are a dictator as a parent then think what that is teaching your children).

Remember when people used to say that children should be seen and not heard?

Nor will your children, so be honest and respect each other.  When you get it wrong admit it, when they get it wrong, help them to learn from it.

You know that feeling when you hold a broom behind you with both hands holding either end and then you have to lift it over your head without letting go?  That’s what physical issues can feel like.

Now there are loads of times that having physical issues, even just learning to tie shoelaces (especially now we have zips and velcro) can cause a child to be overwhelmed and have a meltdown.  Show empathy, give your child a helping hand and don’t rush them.

10. Allergies or other medical reasons

There’s a whole bag of medical reasons that can cause your child to be having meltdowns and tantrums.

If none of the above has worked, then start considering medical causes.  I know of one child who was allergic to tomatoes for example and not eating them made a huge difference.

As with so many of these causes, STOP, STEP BACK and OPEN YOUR EYES, we get lost in the day to day world of parenting, look at the bigger picture, the patterns, these are your clues.

Tantrums really are caused by a child being overwhelmed about something.

This is new science, so those of you out there who think that their child chooses to be like this and ‘why don’t they just get it’, just think for a moment.

You are not wrong to be thinking like this as that’s how we were raised, the parenting models that we were shown were current at the time.  We recognise that that has changed now and so must our parenting.

STOP, STEP BACK and OPEN YOUR EYES to see what is causing your child is getting overloaded.  It’s so easy to get caught up in the whirlwind of family life every day and that is part of the problem.