Article 5 Mistakes Parents Make When Feeding Their Kids… How Do You Rate? 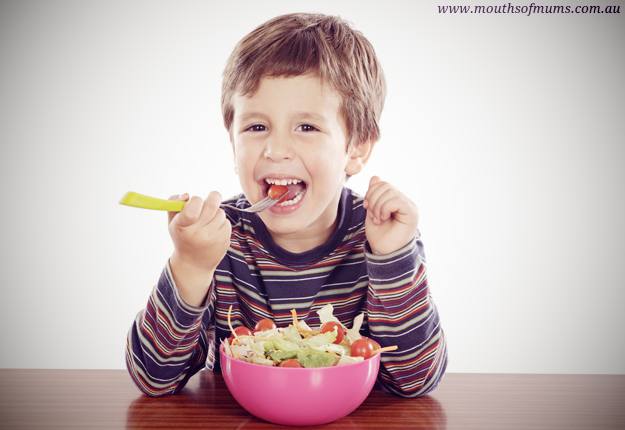 Fussy eating is a normal part of childhood. We want to get through these stages smoothly, happily and with as many veggies as possible. But how? Are we actually (albeit inadvertently) sabotaging our own efforts?

Here are the top 5 blunders parents make when feeding their kids. If you can avoid these, you’ll have happier mealtimes, less fussy kids and ultimately have raised veggie-loving adults.

I run lots of kids cooking classes and spectating parents are forever telling their kids “you don’t like (eat) that” or telling me, “he doesn’t like …”.  My usual response is “shhh…don’t tell him, perhaps he’s forgotten!”

It does make sense; you don’t want an entire plate of veggie wrap rejected because of the one little tomato that you know they won’t like… Well, it’s actually a blunder. Expectation rules outcomes, and kids love meeting your expectations… both good and bad. It’s been shown time and again; expect a child to fail and they generally will. Believe in them and you’ll be amazed by what they achieve.

If you believe your child won’t eat something, they are going to do their best to meet your expectation!  Give kids benefit of the doubt, trust them and certainly never tell a child they don’t like something.

We go one step further in our house. We have a food kindness rule. If you like a food, you tell the world. How deliciously sweet the corn is today, how crunchy the carrot is, how your favourite dish is zucchini fritters. But when the food is “not your favourite” (you don’t like it), don’t say a word. You try it and politely leave it on your plate.

And it works, last night my son announced; “Broccoli is my least favourite green”, then gobbled the lot! Luckily I didn’t remind him that he doesn’t like broccoli.

It’s easy to do. You offer pumpkin a couple of times, it never gets eaten, so you give up.  Stop serving it, stop buying it, stop cooking it and it’s like it never existed. But, it’s hard to eat something that doesn’t exist.

3, 7, 10, 17 – studies come up with lots of magic numbers about how many times a child (or adult) has to see, feel, touch and taste a food before they learn to like it. I don’t know which is right, but truth be told, with healthy foods you should simply never stop offering!

Parents often stop cooking foods they enjoy “cause the kids won’t eat it” (refer to mistake #1). Don’t take it personally, just remember – if the kids don’t eat it, it’s more for you!

Your kids may have tried peas before and turned up their noses. But have they tried them straight from the freezer? Fresh from the pod? In a soup? In a stew?  Dipped in mushroom sauce? How can you say they don’t like peas when there are so many different ways to try them!

Encourage your kids to try different foods but don’t force them to finish everything on their plate. It is your responsibility to serve healthy food at regular intervals and it is their choice to eat it and choose how much to eat.

Small kids are great at listening to their body’s hunger and fullness signs. We don’t want them to lose this ability (as many adults have). Let kids listen to their bodies, eat more some days and less on others. Getting them to try everything is the key, leave the force to Star Wars.

4. Use food as a bribe and/or reward

As much as possible, avoid using food as a reward or bribe. It implies that dinner is inferior and the reward, for battling through the dreaded veggies, is this amazing sweet. Sweets have enough allure for kids without us putting them on a pedestal.

Get creative, think of alternatives to reward good behaviour; a trip to the park or zoo, stickers, pocket money… anything but food.

Also, don’t have dessert every night. Kids quickly learn that they don’t need to eat dinner because they can fill up on the after-dinner foods.

5. Feeding kids all the time

When kids constantly graze, they don’t get to experience their body’s natural hunger/fullness cycle. Listening to when your body is hungry and full is a useful tool for avoiding over-eating and non-hungry eating.

When kids eat non-stop after-school they are often not hungry at dinnertime.  Offer meals and snacks at set times (and only water in-between) rather than grazing all day.

So, how did you go? Have you made any of these mistakes?

I’m sure we all have. Never mind, don’t worry! We learn from our mistakes. If you can change the way you think and act around food, you just may make your life a little easier and your kids a little more adventurous with their eating.

Have you made any of these mistakes? Tell us in the comments below