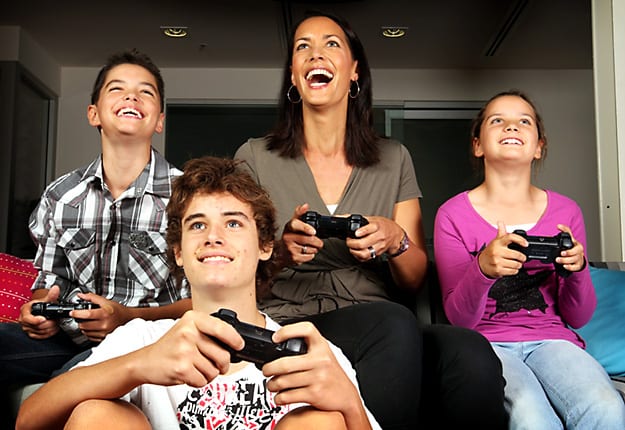 It can lead to awkward moments when other children come around to play. “Our mum doesn’t let us play video games because she says they’re bad for you.” We’ve all heard it before, but is it true? Although the evidence suggests video games can be educational, social and fun, the perception is hard to shake.

We all struggle to keep up with the best approach to parenting as what might be sworn truth for one generation is upended for the next. The onrush of technology is forcing us to rewrite the rules of parenting more frequently. Watching more than an hour of television when I was growing up would “give you square eyes”, but you only need to look around to see children of all ages, even pre-schoolers playing on their own portable game devices! Likewise, long-held misconceptions about video games have become deeply entrenched, causing unnecessary worry to parents.

Here are some of the most common myths about video games. Fortunately, the truth is a lot less alarming.

This myth frequently emerges in the aftermath of a publicised crime. For example, the NSW police commissioner Andrew Scipione recently blamed violent video games for contributing to a rise in teen knife crimes. Also, the fact that some serial killers involved in mass-school shootings in the US played video games involving shooting is often claimed as evidence of a link. But the truth is there’s no conclusive evidence to suggest that violent video games lead to violent behaviour. In fact, youth crimes have declined over the last 40 years whilst the rate of video games played by children and adults has soared.  At the end of the day, it is up to us as parents to make sure our kids aren’t playing games that are inappropriate for their age.

At least once a month, I hear people claim that the internet is an unsafe place, home to predators and cyber-bullies. While cybercrime is something not to be taken lightly, the reality is that millions of people play online games every day without incident. The online playground should be treated like the real-world one. Just as you wouldn’t let your little ones run amok on their own, as parents, we need to take an active role in monitoring our child’s gameplay experience.

For example, my youngest is a huge fan of Little Space Heroes (just quietly, so am I!), an online game where children are encouraged to work together as they explore the universe and go on quests. The ability to socialise and collaborate with other children online is what makes this game such a fun and enriching experience, but I make sure that I keep a close eye on who they’re chatting with online. Little Space Heroes also has a team of in-house community moderators and filters, to prevent inappropriate language, names and phone numbers appearing in the game.

Just like any other hobby, parents need to set boundaries over how much time their kids should spend on the game console. Video games need to be included in the total ‘screen time’; so for example in my household, if the kids are playing on their Nintendo DS or Playstation Vita, they can’t also watch TV. This is where parental control features come in handy.  All the latest games consoles and handheld devices are equipped with password-protected controls to help parents balance the amount of time children spend playing games.  These features can also be used to control what kinds of games your children play, whether it’s PG or MA15+.

You only need to peek inside a classroom to see how schools are embracing technology these days. From digital whiteboards to personal iPads, teachers are bringing more technology into the classroom for the simple reason that it can be a very effective tool for learning. In fact, I know of teachers who are using games such as SimCity and Civilizaton to educate children about how governments and cities are formed, as well as foster children’s strategising, creativity and critical thinking skills. If only we had these kind of innovative games while I was in school!

In the Digital Australia report, over 80 percent of gamers think there’s an educational benefit to gaming, and over 70 percent of parents use video games for education in the home as well.

It’s true that in the early days of Space Invaders and Pacman, there was very little interaction between gamers except for players swapping positions at the arcade with whoever was waiting their turn. But these days many video games are designed from the ground up to be social experiences. Even if it’s as simple as a scoreboard to compare results or a full-blown interactive world, video games are now full of interaction. When my middle one was younger, he was a big fan of Club Penguin – an online game which not only helped him improve his typing, reading and writing but also allowed him to safely interact with other kids his age all around the world.

And my son isn’t the only one – a recent study by the Interactive Games and Entertainment Association (iGEA) found 70% of people enjoyed playing games with others. It’s like anything in life. If you take responsibility and give your kids some guidance then video games can be educational, social – and a lot of fun.