Article Baby Girl Healthy One Minute Fighting for Life the Next 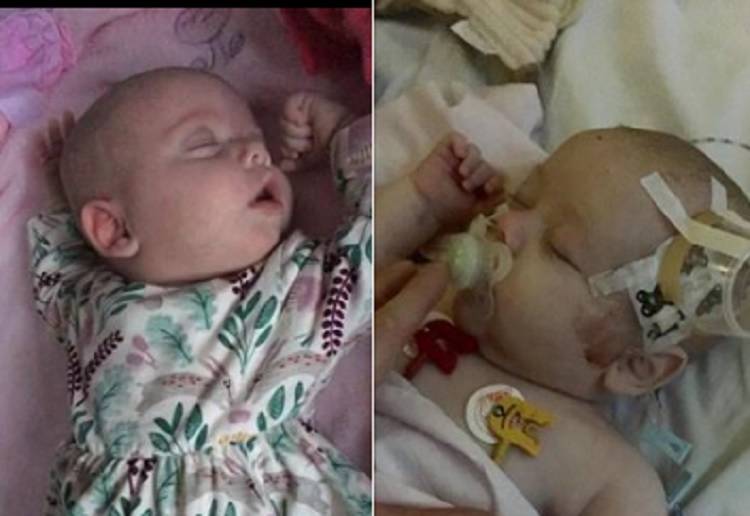 Mum shares frightening footage of her baby girl who went from being healthy to fighting for her life within an hour.

Katie Goulbourn posted the clip on Facebook, which shows her daughter Chloe asleep in her cot at 3.53pm, followed by a picture of her in intensive care at 5pm.

She claims her 11-week-old’s life-threatening sepsis, a violent response triggered by an infection, took just four hours in total to take over her tiny body.

Miss Goulbourn shared the video of Chloe, from Holmes Chapel, Cheshire, and said if she knew the symptoms she would have been quicker to get help.

More than 1.5 million people have watched the clip, posted on Facebook, with thousands praising her for sharing it – despite it bringing back all her fear.

Miss Goulbourn added: ‘This was an extremely difficult and personal time for our family, one we have thought long and hard about sharing.

‘Ultimately we decided that if it makes one parent check symptoms quicker – then something good can come from sharing this.’

Katie shared Symptoms of Sepsis:
– Grunting noises when breathing (it started off sounding very normal, like she was trying to poo, and gradually escalated to the sounds you hear in the video)
– Struggling to breathe (notice how Chloe’s stomach is being drawn in beneath her ribs as she breathes. Signs could also be chest dropping and head bobbing with each breath)
– High or low temperature
– Mottled skin
– Off their food
– Decrease in wet nappies
– Rash which doesn’t fade when pressed

Last year grieving QLD parents were determined to raise more awareness of the infection after their son sadly died from sepsis. Read their story here.