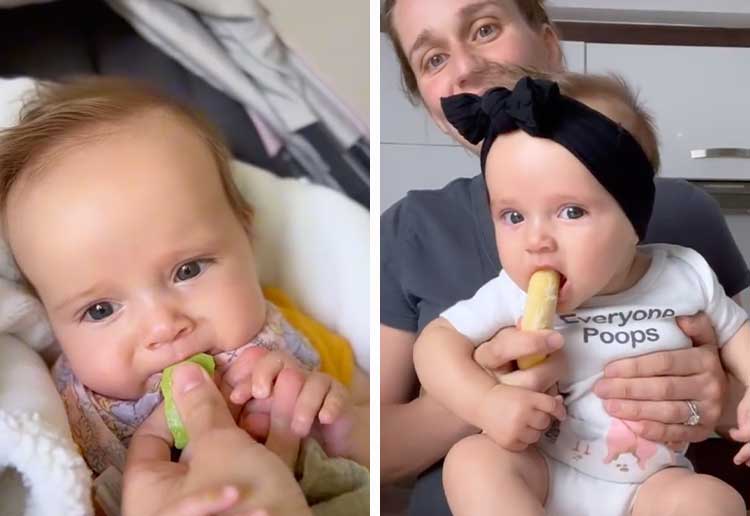 Starting solids is such an exciting journey for babies – so many new tastes and textures to try! And traditionally there’s only been a couple of different ways to introduce solid food to a baby, but now there’s a new kid on the block – Baby Led Licking!

“So I started this thing last week with my four-month-old that I’m jokingly calling Baby Led Licking and I’m sure people will have plenty to say about it,” Michelle explained in a TikTok video that’s been viewed more than one million times.

“She’s not ready for Baby Led Weaning yet, but gee has she enjoyed getting to know her tastebuds while licking fresh fruits and veggies that I’ve been safely holding in my hand.”

Understandably, the video has drawn a mixed reaction from other parents, many saying four-months is too young for a baby to try solid food.

Ashley Morton said: “I did this too! But I waited until the recommended 6 months.”

“It’s because the bacteria in the food if not sterilised is harmful before 6 months,” said Shannon Iou.

However, there were also many supportive comments who said they had or will try this with their babies.

“Mums know when their babies are ready. My son was 4 months when we started adding food to his diet, my daughter wasn’t interested til 6 months,” said Stacey Jaki Bogan.

According to Australian guidelines, babies can start having solid food by around six-months-old. Before six-months they get everything they need from breastmilk or formula. It’s not recommended to introduce solids before four-months.

Introducing babies to solids can be done by using mushy or pureed food, or via Baby Led Weaning.

What do you think of Baby Led Licking? Would you try it with you baby? Let us know in the comments below.