Article “Being a Mum is Not Hard. Stop Pretending it is.” Oh no she didn’t! 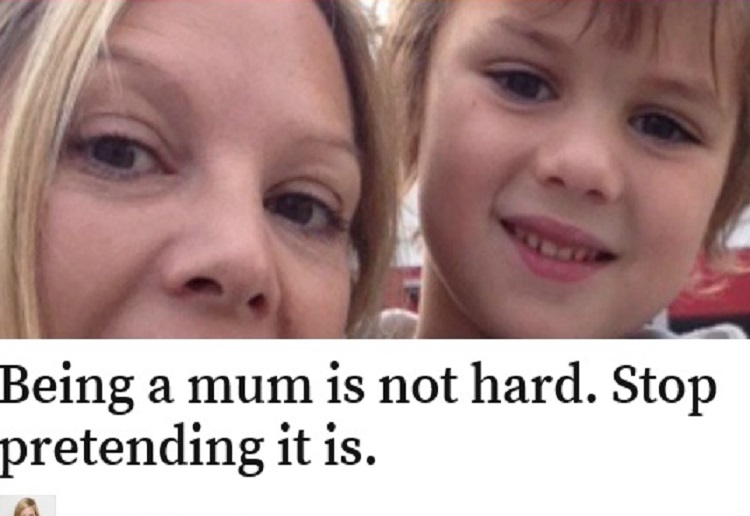 An article titled “Being a Mum is Not Hard. Stop Pretending it is,” has outraged this mum and we think she makes a good point. Who gets to decide if your hard is worse than mine?

Lauren explains, the title made me angry enough but hoping it was just click bait, I decided to read the full post and as expected, I was still angry after reading.

You can see a quote from the article below….

It certainly isn’t a constant dance on a mountain of happiness.
But it isn’t hard.
Do you even need me to tell you what IS hard?
Or can you just look around your own home or office to be reminded. The lives of the workers who made the devices you are reading this on. The lives of the women who crafted the clothing you are wearing. The lives of the mother who works two jobs to feed her children. The life of the refugee desperate to get to a land which represents freedom and safety.
That’s hard.

But not your life. Not mine. Not waking up with three bustling bursting with life chaotic children who one-by-one snuck into my bed overnight.
Not shopping in well-supplied supermarkets for abundant food for my family. Not spending each day with the satisfaction of a job that allows me to be near my children when it really counts.
That’s not hard. 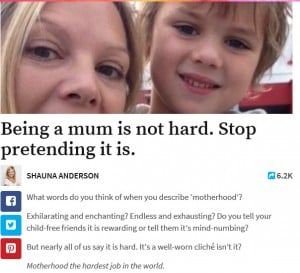 Lauren argues, My Nan has always instilled in us “there is always someone worse off, be positive” and this is true.  Coming from someone who has had a huge amount of struggles throughout her early life during the war, it rings even more true to me after hearing of her experiences.  But, if I ever told her that I was finding something hard, I was never told that it wasn’t.  I was told that aspects of our life can be hard sometimes but that it’s okay because we can overcome this eventually if we put our mind to it.

I wasn’t told that my struggle or hardship wasn’t viable because other people were struggling more than me. Each person’s struggles and hardships are their own.  There is no ranking system.  It doesn’t need to be compared.  Something that is hard for me may be an absolute walk in the park for others.

There are so many people in this world doing it tough.  Facing heartbreaking hardship and struggle. However, I’m sure, that just like us, these people would proclaim their hard days and then think about the people even worse off than them.  Which is unimaginable, really.   Yes, “the lives of the women who crafted the clothes you are wearing” may be harder than what we are currently experiencing, but that doesn’t mean that our feelings need to be disregarded.

We aren’t devaluing the hardship of others when we say that motherhood or parenting is hard.  It’s the best thing to ever happen to me, the love I have for my daughter is like nothing I’ve ever felt before and it is damn rewarding.  But it can be HARD and by saying that it is, is not me being a “mummy complainer,” it’s not “creating a construct of a life unappealing,” it’s just me expressing my emotions and feelings because I’m sick of society placing “perfect parent” badges on the parents who’s lives seem completely positive.

When I posted a blog about Losing Myself in Motherhood I had numerous messages and comments from mums who were too worried about telling people they felt the way I did.  I was scared to post it, in case people thought that because I spoke about feelings that could be seen as negative, I wasn’t a good parent.  I am.  I’m a great Mum and Lola might never see the effects of me having a bad day, but it doesn’t mean that I don’t and it doesn’t mean I should hide it from others.

I’m all for positive parenting.  I’m all for sharing the great times. However, the effects of not sharing the dark times can be extremely detrimental to one’s mental health.  If we came home from work and mentioned our hard day, would anyone question this?  Not usually.  So why is parenting any different?

As parents, we have hard days, blissfully easy days, exhausting days and days we wish would never end.  It’s okay!  It’s okay to have a hard day, it’s okay to say that being a mother is hard.  Who is anyone to tell us otherwise?

Lauren Eccleston is a work from home, Mum to one who lives in Country NSW. Originally a city girl, Lauren is not only adjusting to country life but also Mum life.