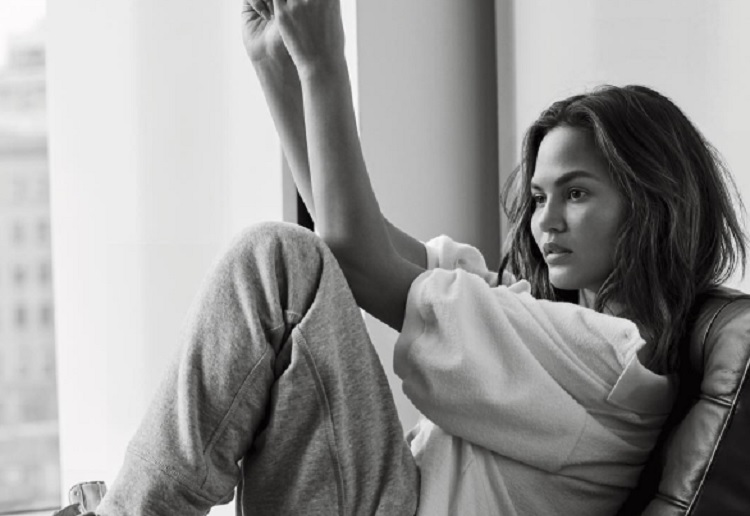 In an exclusive article for Glamour, Chrissy Teigen talks about her experience with PND, why she kept it private, and how she’s doing now.

After giving birth to her daughter, Luna in April 2016, Chrissy shares she developed postpartum depression.

Chrissy shares, “To a lot of you, I think, I seem like the happiest person on the planet. I have an incredible husband—John and I have been together for over 10 years. He has seen my successes and failures; I’ve seen his. He has seen me at my worst, but I will say I don’t think I have ever seen him at his. He’s exactly as compassionate, patient, loving, and understanding as he seems. And I hate it.”

“I had everything I needed to be happy. And yet, for much of the last year, I felt unhappy. What basically everyone around me—but me—knew up until December was this: I have postpartum depression. How can I feel this way when everything is so great? I’ve had a hard time coming to terms with that, and I hesitated to even talk about this, as everything becomes such a “thing.” During pregnancy, what I thought were casual comments about IVF turned into headlines about me choosing the sex of my daughter. And I can already envision what will be said about me after this admission. But it’s such a major part of my life and so, so many other women’s lives. It would feel wrong to write anything else. So here goes.”

“Getting out of bed to get to set on time was painful. My lower back throbbed; my ­shoulders—even my wrists—hurt. I didn’t have an appetite. I would go two days without a bite of food, and you know how big of a deal food is for me. One thing that really got me was just how short I was with people.

I would be in my dressing room, sitting in a robe, getting hair and makeup done, and a crew member would knock on the door and ask: “Chrissy, do you know the lyrics to this song?” And I would lose it. Or “Chrissy, do you like these cat ears, or these panda hands?” And I’d be like: “Whatever you want. I don’t care.” They would leave. My eyes would well up and I would burst into tears. My makeup artist would pat them dry and give me a few minutes.

I couldn’t figure out why I was so unhappy. I blamed it on being tired and possibly growing out of the role: “Maybe I’m just not a goofy person anymore. Maybe I’m just supposed to be a mom.””

“I went to my GP for a physical. John sat next to me. I looked at my doctor, and my eyes welled up because I was so tired of being in pain. Of sleeping on the couch. Of waking up throughout the night. Of throwing up. Of taking things out on the wrong people. Of not enjoying life. Of not seeing my friends. Of not having the energy to take my baby for a stroll. My doctor pulled out a book and started listing symptoms. And I was like, “Yep, yep, yep.” I got my diagnosis: postpartum depression and anxiety. (The anxiety explains some of my physical symptoms.)”

“I started taking an antidepressant, which helped. And I started sharing the news with friends and family—I felt like everyone deserved an explanation, and I didn’t know how else to say it other than the only way I know: just saying it. It got easier and easier to say it aloud every time. (I still don’t really like to say, “I have postpartum depression,” because the word depression scares a lot of people. I often just call it “postpartum.” Maybe I should say it, though. Maybe it will lessen the stigma a bit.)”

“I’m speaking up now because I want people to know it can happen to anybody and I don’t want people who have it to feel embarrassed or to feel alone. I also don’t want to pretend like I know everything about postpartum depression, because it can be different for everybody. But one thing I do know is that—for me—just merely being open about it helps. This has become my open letter.”

Posting on Instagram Chrissy added, “I’ll just say it: I have post partum depression. So much love to @glamourmag for letting me share something that was eating me up inside for months and months.

One of the most amazing things about social media is the ability to interact candidly with friends and fans and it felt so weird knowing what I was going through but not really feeling like it was the right place to speak on it.

I’ve always felt genuinely close to all of you and I’m insanely relieved you now know something that has been such a huge part of me for so long.”

It is SO great to see celebs doing their bit to break the stigma.

Can you relate to what Chrissy is saying?