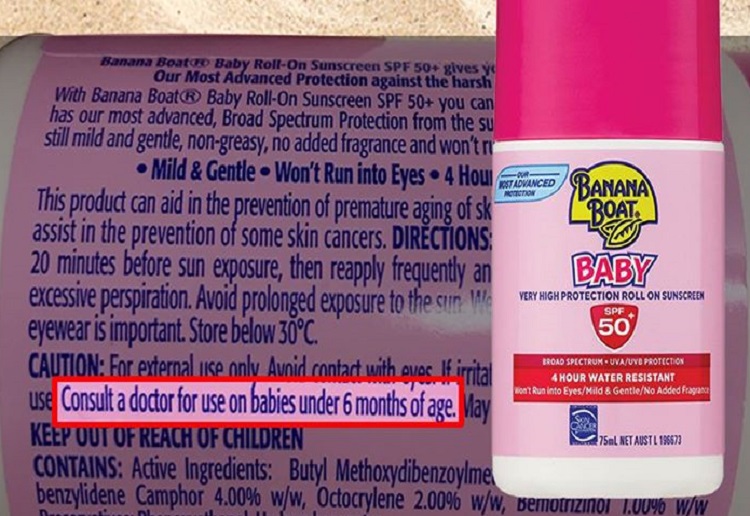 Did you know you should consult a doctor before using sunscreen on your infant?

CHOICE conducted a quick poll of parents and found a variety of opinions when it comes to using sunscreen on very young babies.

According to CHOICE some parents had been told never to use it on babies under six months, others had been told it was OK in small doses, while others still had not been told anything at all and were under the impression it was fine to use early on.

So CHOICE went and dug a bit deeper by asking the experts.

The Australasian College of Dermatologists says that the use of sunscreen on young babies under the age of six months is not recommended. The college website says the reason for this is that a young baby’s skin tends to absorb more of any chemical applied than would the skin of an older child or adult.

The Cancer Council’s position differs from this slightly. It says that if infants are kept out of the sun or well protected from UV radiation by clothing, hats and shade, then sunscreen can be used occasionally on very small areas of the skin.

Dr David Orchard, director of the dermatology department at the Royal Children’s Hospital in Melbourne says there’s no evidence to suggest that sunscreen is unsafe for babies under six months. “Once a baby is a week old their skin is no different to an older baby or a child.” However, he does say that it’s better to keep babies out of the sun in the first place.

“Young babies don’t move much so it’s pretty easy to keep them shaded anyway, but if you are taking them for a quick dip in the ocean, for example, you can use sunscreen on any small areas that can’t be covered up with clothing and hats.”

Cancer Council CEO Professor Sanchia Aranda says that the Cancer Council’s official position is similar to the Australasian College of Dermatologists’ but that it’s more “realistic”. “Some people have a lifestyle where sunscreen is going to be a requirement for even infants occasionally.”

Aranda says that shade and clothing should always be the first line of defence but sunscreen is suitable for small areas you may not be able to cover up completely. “Say if they’re in the pram for a short period of time and the tops of their feet can’t be covered.”

What should you use?

If you are going to use sunscreen on a young baby, choose one labelled as being for sensitive skin or suitable for children. According to Dr Orchard these products will have fewer chemicals that could cause irritation. The alternative, he says, is to choose a zinc-based (physical) sunscreen.

Sydney-based doctor Brad McKay says that mineral-based sunscreens containing titanium dioxide or zinc oxide are considered to be the safest option for babies under six months, as they offer protection from UV light but very little is absorbed through the surface of the skin. “Mineral-based sunscreen tends to leave a white residue on the skin, but this is easily washed off.”

Don’t keep babies in the sun. Keep them in the shade when you can.
If it’s impossible to avoid the sun, make sure they are only exposed for a few minutes.
If you can’t cover your baby with clothing when they are in the sun, use sunscreen designed for sensitive skin or for children, and only apply it to small areas that aren’t covered. Be sure to do a patch test first if it’s a brand you haven’t used before.
Be prepared when you go out – carry suitable clothing, hats and sunscreen so you aren’t caught out.
Role-model the behaviour – kids and even babies are more likely to be happy to wear sun-safe clothing and hats if you do.

For all of us:

Put on sunscreen 15–20 minutes before going outside.
Make sure you use enough sunscreen – you need at least a teaspoon (5mL) for each leg, arm, your back etc. and more if you’re bigger.
If you’re sweating heavily or rubbing your face, you’ll need to reapply every two hours. And reapply if you’ve been in the water.