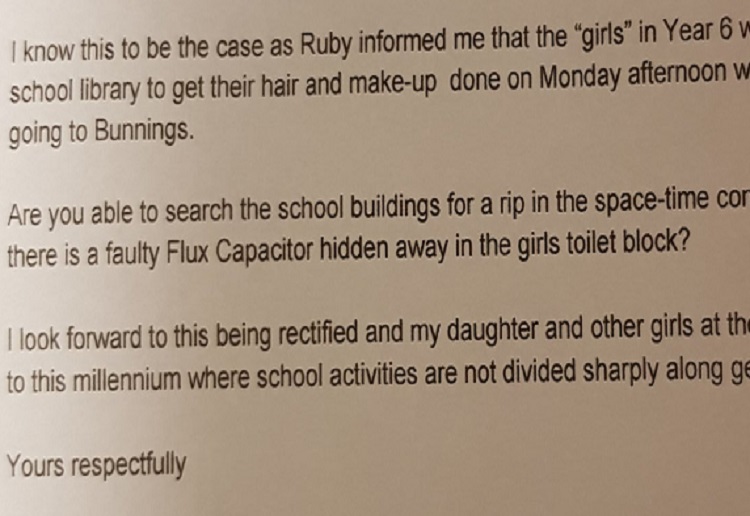 Dad slams his daughter’s school for dividing activities by gender and sending the Year 6 girls to make-up classes and the boys to Bunnings.

The NSW dad shared the letter to Twitter on Thursday, which said his daughter Ruby had left for school in 2017 but returned as if it were 1968.

He said her Year 6 teachers had divided the male and female students, sending the ‘girls’ to get their “hair and make-up done” and the boys to Bunnings.

“Are you able to search the school buildings for a rip in the space-time continuum?” the annoyed father wrote in the letter addressed to the principal.

“Perhaps there is a faulty Flux Capacitor hidden away in the girls’ toilet block?

“I look forward to this being rectified and my daughter and other girls at the school being returned to this millennium where school activities are not divided sharply along gender lines.” 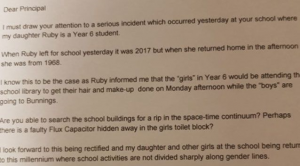 I wrote a letter pic.twitter.com/oFJp7egVnf

The father-of-three said the humorous letter was aimed at making a point about “everyday sexism,” news.com.au reported.

A Department of Education spokesperson told news.com.au: “A long tradition at Dubbo West Public School has been activities including preparing hair and light make-up with professionals on the day of the Year 6 graduation.

Do you think this is sexist? Surely the students have a choice of what activity they would prefer to participate in.