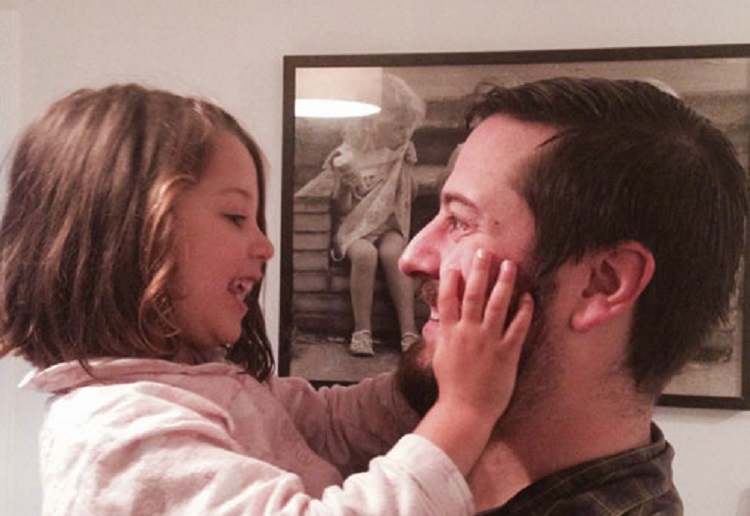 Patrick O’Malley, from Auckland, was unsure what to think when he failed to instantly connect with his baby girl.

The doting father recently penned a letter addressed to Lola, now three, to explain why he struggled to connect at first and to let other parents know they are not alone if they feel the same way.

When did I fall in love with you? From the moment I first met you. I just didn’t know it yet, he writes.

This is how long I have loved you.

“I was afraid to have a girl, I didn’t know what to do with girls. Was I going to be a good parent? My male role model hadn’t been a positive addition in my life, can I be a positive influence in hers? A million thoughts, feelings and emotions clouding my vision. Subtracting away from this miracle.
You were ever present.”

Some parents instantly fall in love and others take time for that flame to alight. Is that an awful thing to say? Or is it so expected that we feel an instant connection with our children, that society puts us in a position of feeling like an inadequate person?

Constance Hall shared the letter letting other parents know “It’s touching and it’s important for other men to see, but the reason I am sharing it here is because it could help other Queens who’s husbands didn’t instantly bond with their babies. Some of the strongest father child relationships took a bit of time in the beginning xxxx ”

Speaking to Daily Mail, Mr O’Malley said he wrote the letter one night after struggling to get all the thoughts out of his head.

‘I wanted to share this because as a male, you don’t carry the baby for nine months and when they are born you often don’t have an immediate attachment,’ he said.

‘It’s important to show people that it’s normal to not have it right away and that females can feel this way too.

‘I wanted to share my experiences because you don’t know how much each moment will mean later on and everything just happens so fast.’

‘I thought I was alone in my feelings but after speaking to my brother and friends I realised how many others felt that way,’ he said.

‘It’s normal and it should be talked about.’

Mr O’Malley said he stopped feeling as disconnected when his daughter first started communicating with him.

‘I really want mums and dads to know that even if little moments don’t mean a lot at the time, they need to make sure to burn each moment into their memory and take pictures because next thing you know they are walking and talking,’ he said.

‘These moments mean so much later on. Dads who are feeling disconnected early on – hang in there, it does happen. You just wake up one day so in love.’

Mr O’Malley said he also wanted to encourage men to open up and discuss these things with other men.