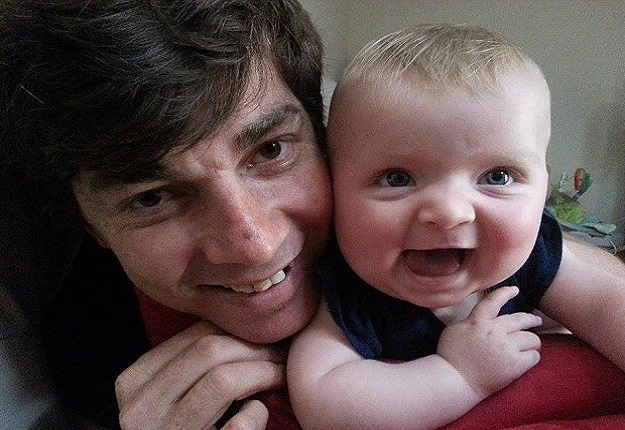 Kate Hinton had planned to deliver her baby at Sydney’s Westmead Private Hospital until staff refused an Auslan interpreter for her deaf husband, Anthony.

The couple were  told the hospital does not even provide these services for women giving birth, as they do not know ‘how long the labour will be’.

‘I explained to [the clerk] the importance of having an interpreter for Anthony as if something were to go wrong with his wife and daughter he would need to know,’ Ms Hinton told Daily Mail Australia.

‘He was concerned if something were to go on he wouldn’t know what was happening and it would just be a flurry of medical staff.’

They even suggested that Kate, an Auslan interpreter herself,  interpret herself between contractions.

The upset and confused couple withdrew their admission from the private sector and decided to go through the public system.

‘I was about 30-something weeks into my pregnancy and we had to make decision,’ Ms Hinton said.

‘We knew the public sector had policies that patients and their families had the right to an interpreter and that we would be protected by their policy.’

On asking whether they could be provided with this service, they said it was no problem.

‘I was flabbergasted, I almost cried,’ Ms Hinton said. ‘I was so relieved it wasn’t going to be an issue with them.’

During the birth of baby Abigail, the interpreter stayed for more than seven hours ‘until [they] didn’t need her.’

Ms Hinton said she was awake for more than 24 hours, there ‘was no way’ she could have physically sat up to tell Mr Hinton what was happening.

Baby Abigail needed special care after he birth and was worked on by a team of doctors before being admitted to the neonatal care unit.

‘We didn’t want Abigail to be on her own so Anthony was able to go to the care unit with the interpreter and ask any questions,’ Ms Hinton said.

‘If we didn’t have the interpreter it would have been really difficult for Anthony to lip read as most of the doctors had accents or surgical masks on.’

The pair have since launched a complaint with the human rights commission.

‘Anthony was concerned that if Abigail was in an accident he would want to be able to use our private health – that was the main impetus of us launching legal action,’ Ms Hinton said.

“We believe the Hintons were not treated fairly or lawfully in this matter,” he said.

“People should not have to make these sorts of compromises.”

A spokeswoman for Westmead Private Hospital apologised to the Hintons but said it was unable to have an interpreter on call.

“The hospital was not able to commit to providing an interpreter service for Mr Hinton during Ms Hinton’s in-patient consultations with the medical practitioner nor during delivery, due to the unpredictable times these events occur and being unable to ensure an interpreter 24/7,” she said.

Kate also said “Since marrying my husband I have seen how much deaf people always have to advocate to access things most people take for granted,” she said.

“It always seems like a fight. The birth of a child is such an important part of your life. You shouldn’t have to fight for that.”